As state and local policymakers analyze reported crime, arrest, and victimization trends, they will likely uncover poor quality or limited data across all three categories of data. In many cases, agencies don’t have the data systems or processes in place to collect or share data. To understand crime trends, state and local leaders need to help law enforcement agencies improve their data collection and reporting procedures by using a more robust crime and arrest data system.

Data on victimization can help states not only understand who is impacted by crime, but can also help determine the allocation of resources to address victims’ needs and repair harm. Since many victims don’t report crimes to law enforcement, statewide victimization surveys can be a vital way of identifying who has been impacted by crime and what services they may need. However, few states conduct them due to the expense and complexity of doing so. States can assess victimization trends for crimes reported to police by using NIBRS data, which can show demographic information about victims, injury types, and their relationship to the person who committed the crime. There are other ways to assess victims’ needs, such as conducting focus groups and analyzing victim service provider data, to identify gaps in services.

Demographic data associated with people who are arrested, convicted, and sentenced is necessary to understand whether and how much racial and ethnic disproportionality exists at each stage of the justice system. It can also show how different groups of people are victimized at varying rates. Two major issues in collecting and reporting race and ethnicity data are how a person’s race and ethnicity are captured (i.e., self-reported or determined by an intake officer) and how they are reported (i.e., race and ethnicity are separate or combined). Without state-level policies, local agencies are left to decide whether and how to collect this information. 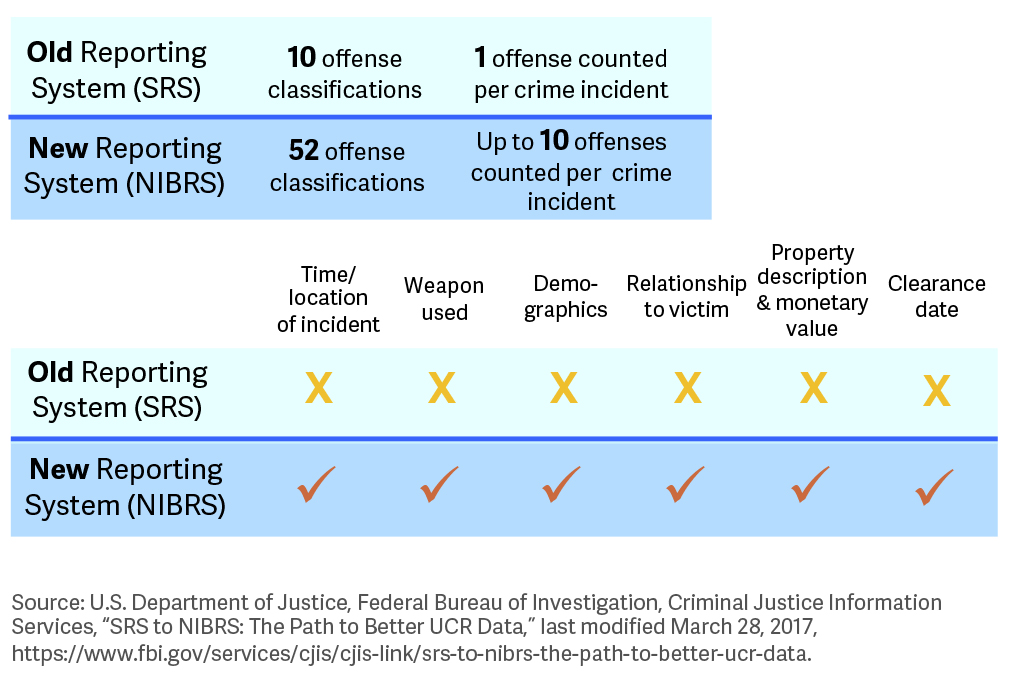 Data metrics reported to the FBI through its Uniform Crime Reporting Program’s (UCR) Summary Reporting System (SRS) have remained largely unchanged since it was established in the 1930s. Recognizing that more sophisticated analyses can only be conducted with more robust data, in 1991, the FBI created and began using a more thorough collection and reporting method called the National Incident-Based Reporting System (NIBRS).

SRS reports on 10 offense classifications and reports only the most severe offense that occurred in an incident, while NIBRS reports on 52 offense classifications and reports on multiple offenses that occurred in one incident. For example, if an incident involving murder, robbery, and motor vehicle theft occurred, only the homicide would count under SRS since that is the most severe offense that occurred at that time. Under NIBRS, each of these offenses would be reported, as well as other information, including demographics, victim information, a description and value of property, and whether a weapon was used.

To address these challenges, the federal Bureau of Justice Statistics (BJS) in partnership with the FBI, has provided grant support to facilitate the conversion from SRS to NIBRS, through their National Crime Statistics Exchange program, which aims to increase the number of law enforcement agencies reporting through NIBRS.

Since NIBRS was implemented in 1991, only 16 states have converted all local law enforcement agencies to this system for reporting crime and arrests. 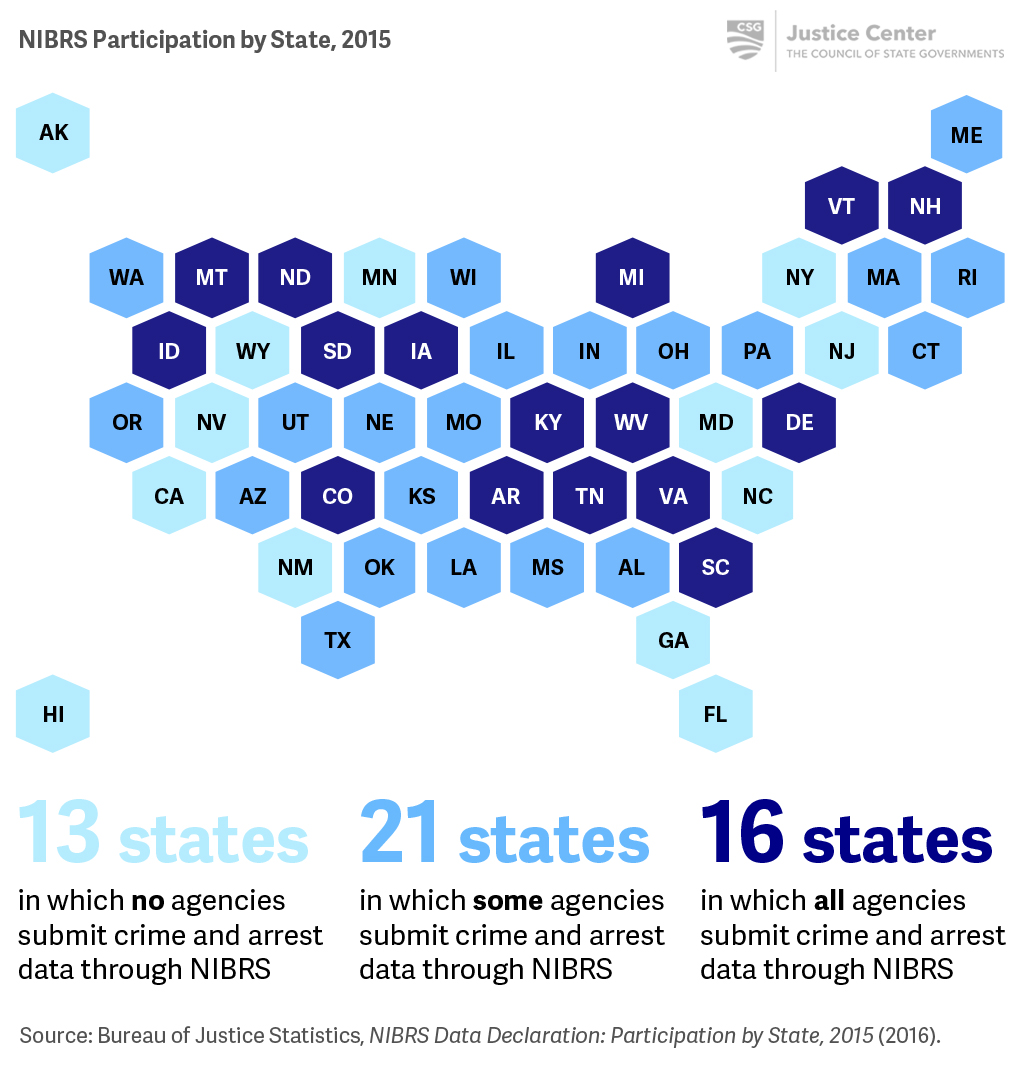 Demographic information can be collected at each stage of the criminal justice system and is critical to ensuring that people are treated fairly under the law. 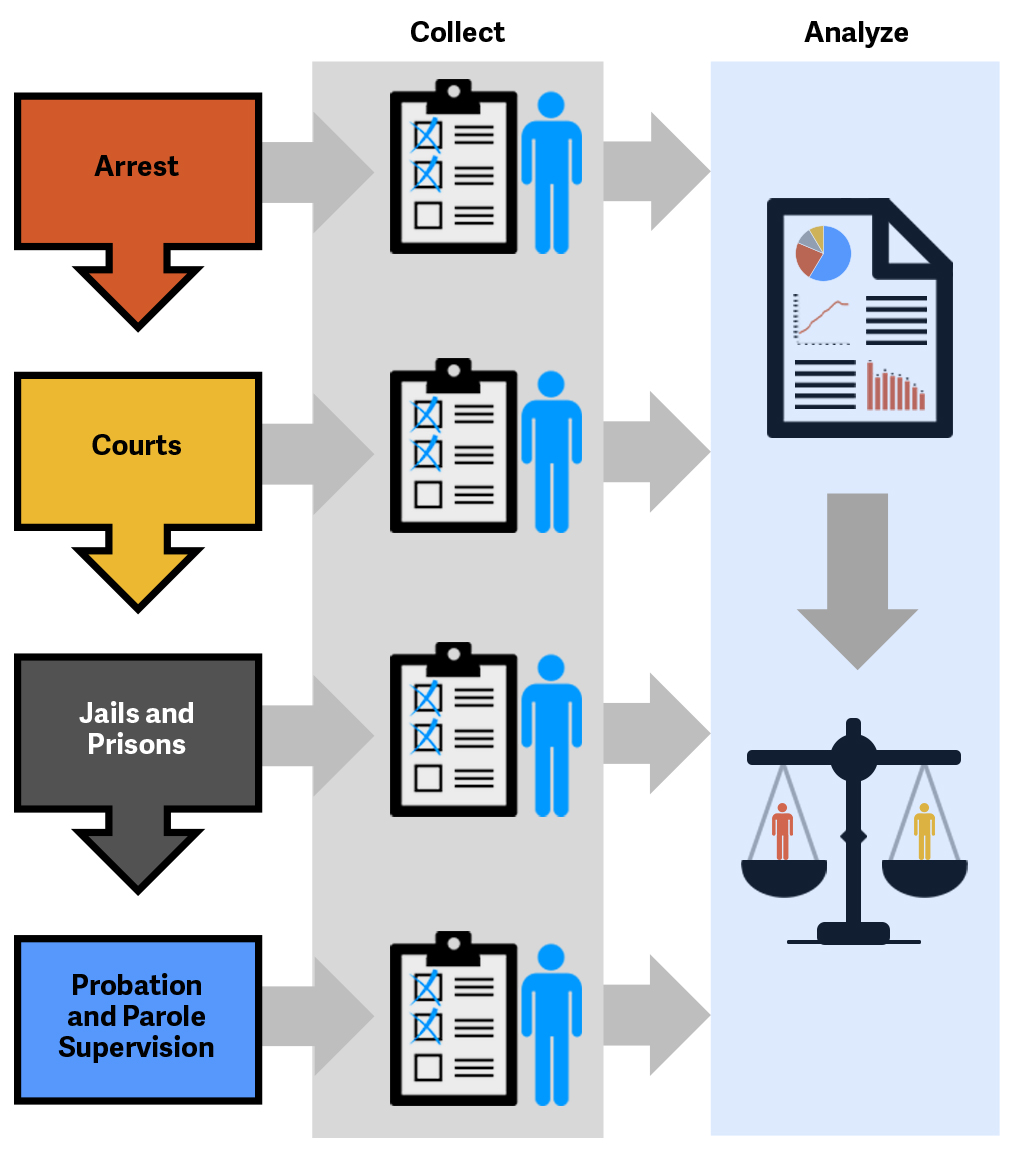 Racial and Ethnic Disproportionality in the Criminal Justice System

Racial and ethnic disproportionalities in rates of people who are victimized, arrested, and incarcerated compared with the general population are a significant concern for the public and officials sworn to treat people fairly under the law.

Yet national, state, and local data related to race and ethnicity suffer from inconsistent methodological approaches to the collection and interpretation of this data, which hamstrings researchers seeking to understand the causes of these disproportionalities across agencies and to what extent policies or practices exacerbate them.

Without comprehensive analyses of high-quality data and a thorough evaluation of related policies and practices, policymakers and criminal justice officials will continue to be frustrated in their attempts to respond to concerns about racial and ethnic disproportionalities and to make sure the justice system treats people fairly and equitably.

For information on how states report race and ethnicity data at arrest and for people in prison, and on probation, and parole supervision, see: The Alarming Lack of Data on Latinos in the Criminal Justice System.

Victimization data is key to understanding how much crime goes unreported. 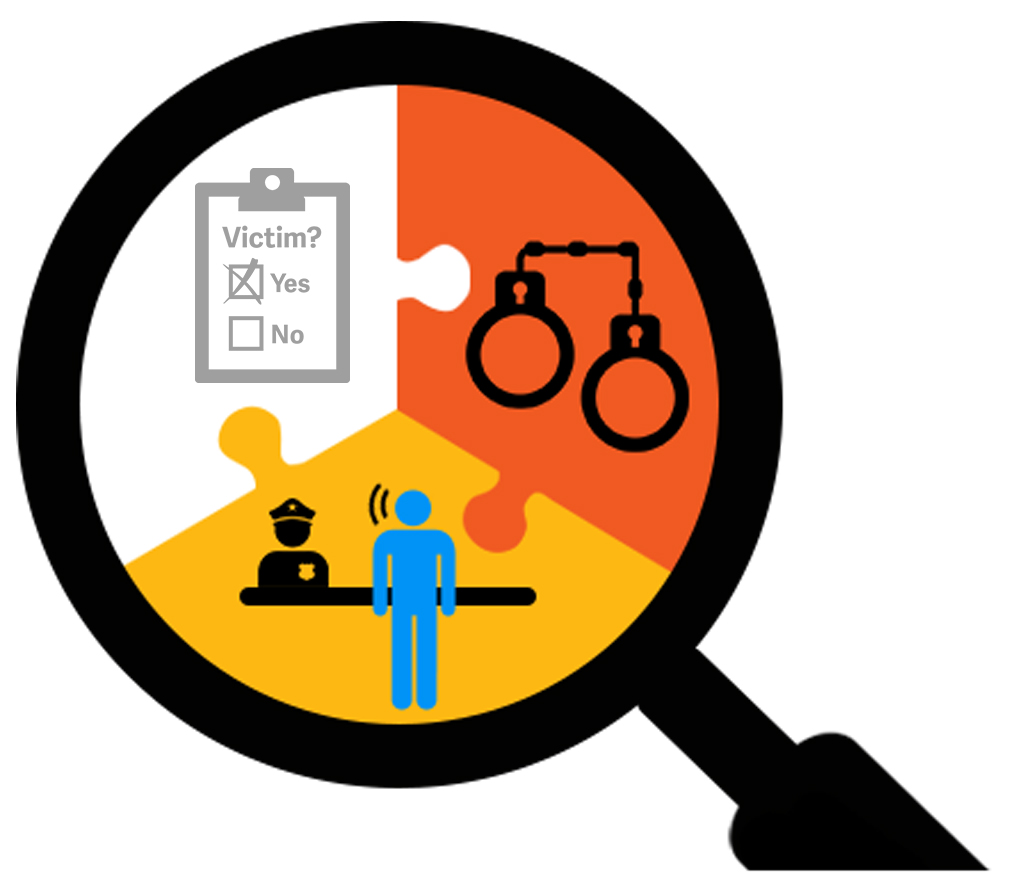 States reduce barriers for law enforcement to participate in NIBRS

InfoNet’s key advantage compared to other reporting systems is its ability to fully capture the quantity and types of services that Washington provides to crime victims. InfoNet collects data and reports by different criteria, including type of crime, hours of services provided, number of contacts, and whether clients are new or ongoing.[16] Having access to this detailed information on a statewide basis allows providers to identify gaps in service and to use this information to inform grant solicitations, client outreach efforts, funding reports, and staff workload analyses.[17]

Second, Washington collected data on victim services from victims, victim service providers, and other stakeholders through a variety of methods, including in-person discussions and an online survey, as part of a statewide planning process to develop recommendations on using federal Victims of Crime Act (VOCA) funds through 2019, as outlined in its VOCA 2015–2019 State Plan.[18]

The Victims of Crime Act (VOCA) 2015–2019 State Plan represents another way that Washington uses data to address service gaps.  This plan is a strategic document that OCVA developed based on victim services data from crime victims, service providers, law enforcement, courts, and other stakeholders.[19] It allocates new pass-through federal VOCA funding to specific areas of need that crime victims and service providers identified:[20]

On August 15, 2016, Iowa’s Crime Victims Assistance Division (CVAD) published the results of a study that assessed whether CVAD programs were responding to the needs of crime victims and victim service providers in the state.[23] The assessment was based primarily on a survey of service providers, and a series of focus groups and phone interviews with crime victims. Based on the findings of the study, Iowa prioritized a portion of the increase in federal formula VOCA Assistance funds for services provided to specific groups. These include victims in rural areas, refugees/immigrants, and LGBTQ-identifying victims, among others.[24]

CVAD also used the assessment results to drive its own statewide marketing campaign to inform members of the public about victim programming and services. Lastly, CVAD used the results of the study to develop a strategic plan for providing training and technical assistance to people in different professions (medical, mental health, law enforcement, etc.) who work with victims of crime.[25]

Some states are making progress in collecting and reporting demographic data.