Three out of five people in jail nationwide are awaiting trial for the crime for which they have been booked and charged.[61] Detaining low- and moderate-risk people pretrial can have a negative impact on their lives and on public safety. Pretrial detention can threaten a person’s employment, housing stability, and access to health care, as well as hinder a defendant’s ability to prepare his or her defense. One study found that defendants released within three days of a bail hearing were more likely to be employed and earn more in the two years after a bail hearing compared to those who are initially detained for more than three days after a bail hearing.[62] Studies show that even short periods of pretrial detention are associated with an increase in the likelihood that a defendant will be sentenced to jail or prison, and people who are detained pretrial receive significantly longer sentences than those who are not.[63] Detaining low- and moderate-risk people pretrial can make them more likely to reoffend, even after just two or three days in jail.[64]

Pretrial risk assessments that assess for risk of rearrest and failure to appear in court help judges make appropriate release decisions and determine whether there should be any conditions of release, such as supervision, drug testing, or electronic monitoring. Objective risk assessments have been shown to be more reliable than a professional’s individual judgment. While a pretrial risk assessment should not be the sole factor in making release decisions, it is currently the best available method for ensuring consistent, research-based decision making.

Risk assessment tools must be routinely validated in any jurisdiction in which they are used to ensure their accuracy. Validation studies should examine the instrument’s ability to identify groups of people with different probabilities of failing to appear in court or engaging in criminal activity, including assuring accuracy across racial groups and by gender, as well as overall population.

As jurisdictions adopt pretrial risk assessments, some are also reducing or eliminating the use of bond schedules that determine financial bail requirements based on criminal charges rather than assessed risk of offending or failure to appear in court. The use of bond schedules may lead to people who commit more serious crimes, but can afford bail, being released from jail, and people who commit less serious offenses, but can’t afford bail, being detained pretrial. This approach puts public safety at risk if people are released due to financial considerations instead of their assessed risk. Bond schedules have also been challenged in court as unconstitutionally keeping defendants in jail because they are too poor to post bail.[65]

Jurisdictions are increasingly turning to pretrial services as a valuable complement to pretrial risk assessment. Using the least restrictive means necessary to ensure appearance in court and promote public safety, pretrial services staff can remind people of upcoming court dates and support their compliance with any conditions the court may require when authorizing their release, such as meeting with pretrial supervision staff, forbidding contact with certain individuals, or complying with curfews, electronic monitoring, or drug testing.

Policies that make admission to jail more likely or increase length of stay often increase the number of people in jail, potentially straining local resources without necessarily increasing public safety. When considering policies that could increase jail populations, policymakers need to assess the policies’ potential impact on public safety and determine whether there are alternative approaches that would further public safety goals without adding pressures to local jails or whether there are ways to provide support to counties to mitigate the impact of these policies.

States can also establish policies and provide funding to support local efforts to use jail space cost-effectively, including supporting efforts to divert people from jail who have behavioral health needs and are accused of minor offenses, when appropriate, engage the prosecution and defense counsel early in the court process, and issue guidance on the use of citations in lieu of arrest. State policies can reduce pressures on jail populations and increase public safety by ensuring that the right people are detained pretrial based on risk assessment results. Ultimately, these policies benefit states by reducing crime, victimization, and the number of people who enter state prisons.

Pretrial incarceration rates have increased in 25 states and fallen in 19 states. 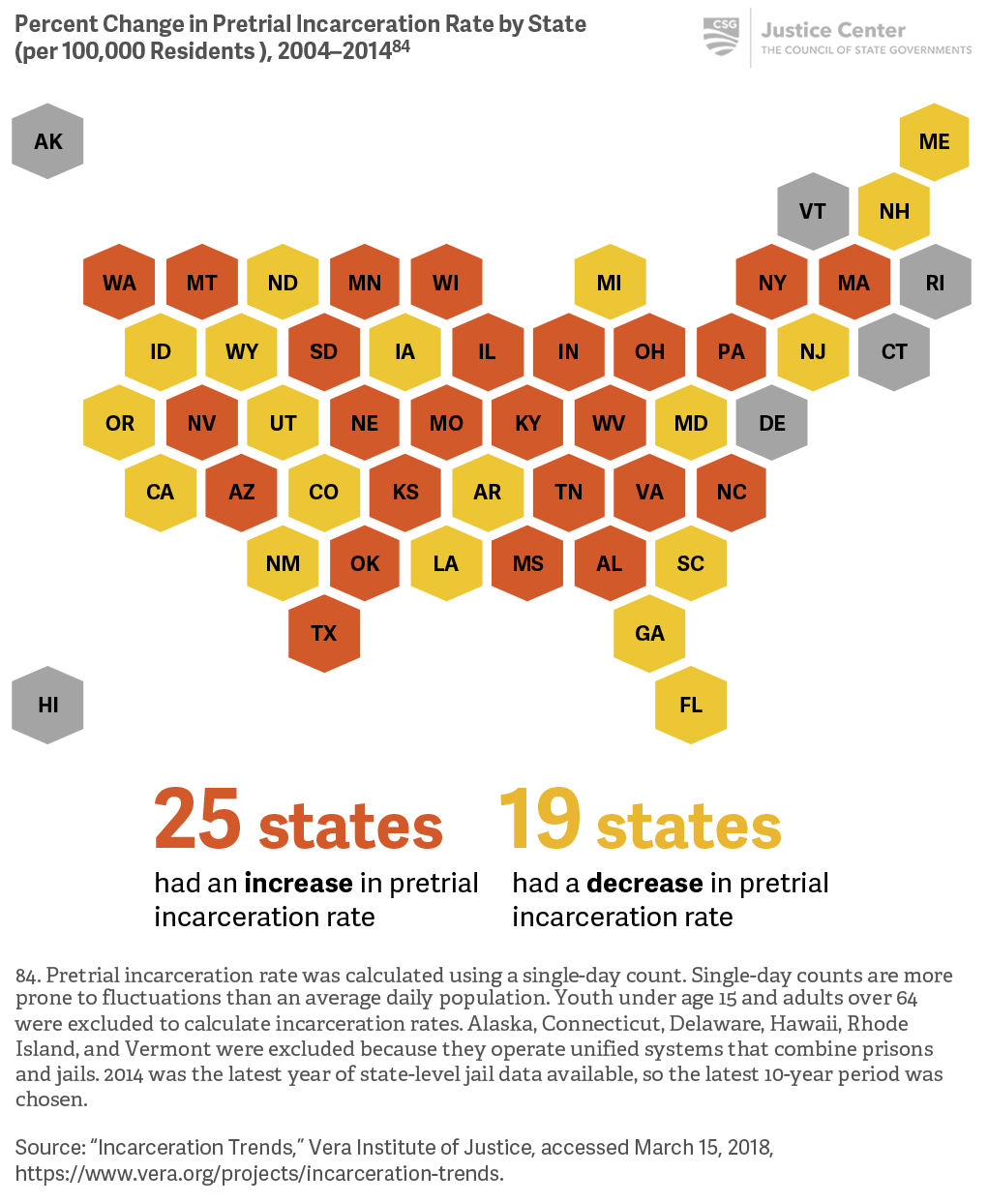 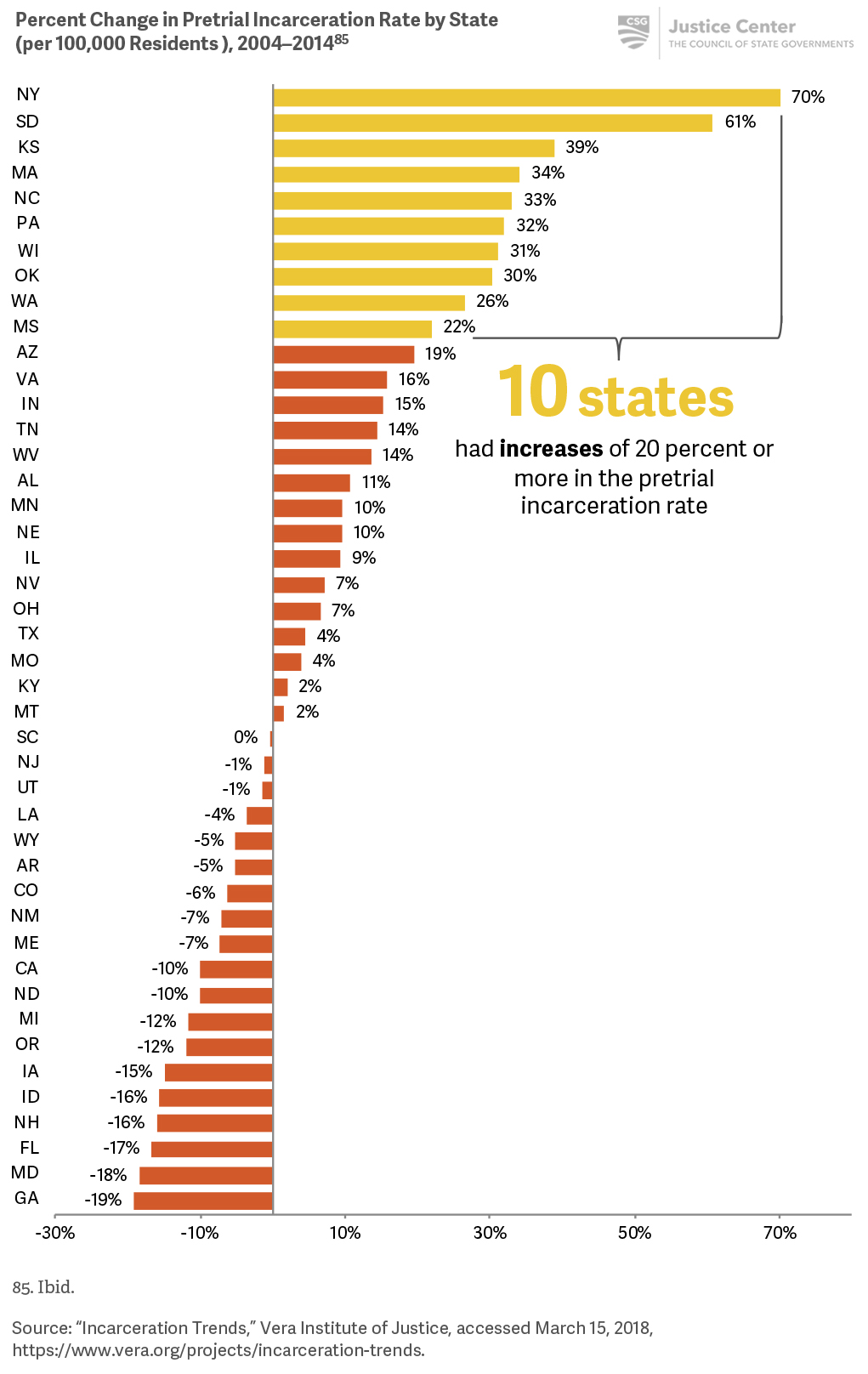 While most people who are arrested do not have a criminal justice status, of those who do, the majority are on pretrial release at time of their arrest for a felony offense. 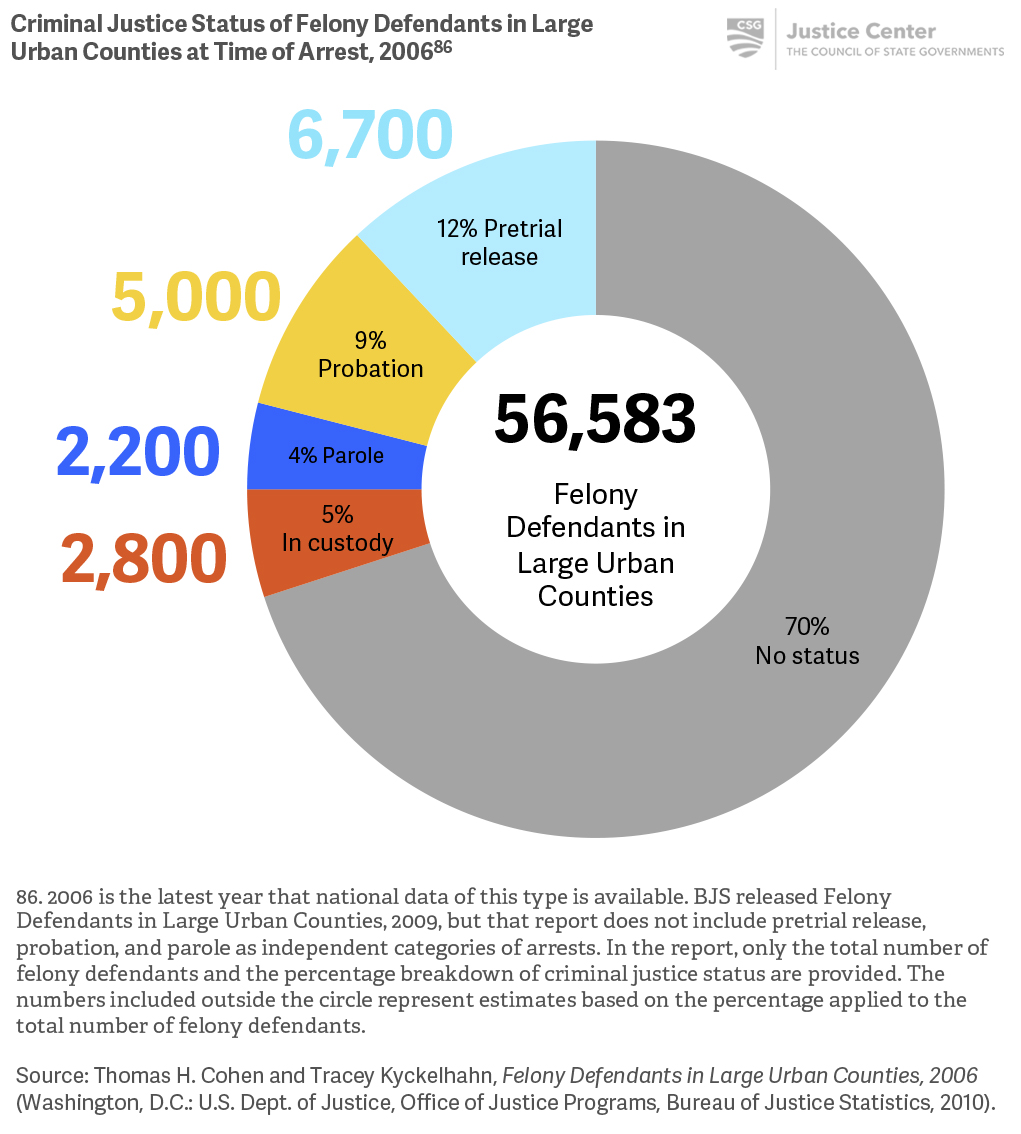 18 states have passed legislation to require or authorize the use of pretrial risk assessment. 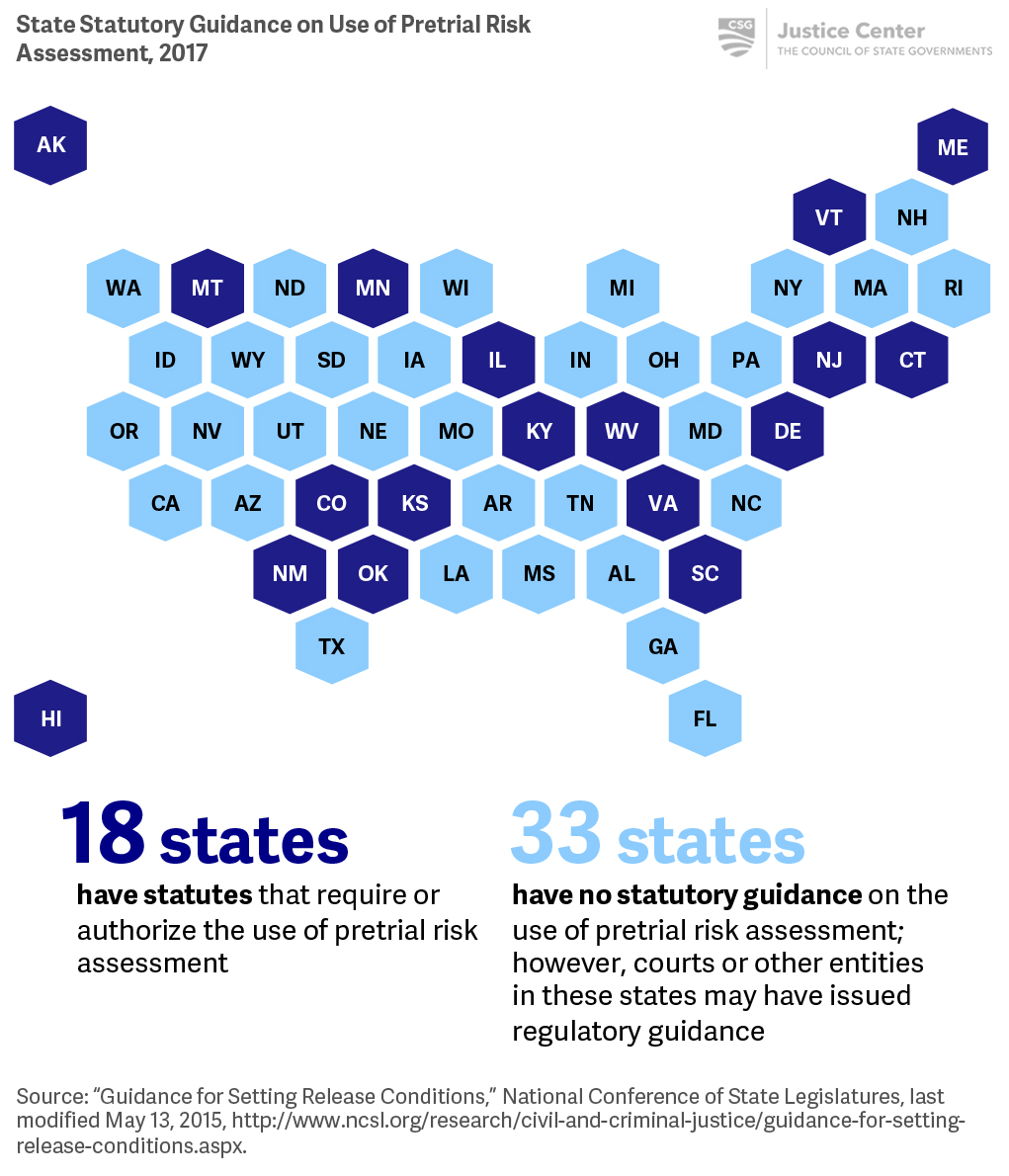 The Safety and Justice Challenge provides support to local leaders from across the country to establish alternatives to jail incarceration. With an initial 5-year, $100 million investment by the John D. and Catherine T. MacArthur Foundation, cities, counties, and states selected through a competitive process receive financial and technical support in their efforts to rethink justice systems and implement data-driven strategies to safely reduce jail populations. For additional information, see Safety and Justice Challenge.

Pretrial risk assessment tools assess for risk of rearrest and failure to appear in court, and some tools, including the Public Safety Assessment (PSA), assess for risk of new violent criminal activity. The Laura and John Arnold Foundation created the PSA to assist judges in making release decisions. For additional information, see Public Safety Assessment.

Research shows that even three days in jail can make low-risk defendants less likely to appear in court and more likely to commit new crimes.[87] The Pretrial Justice Institute created 3DaysCount, a nationwide initiative to reduce arrests, replace money bail with risk-based decision making, and restrict detention (after due process) to people who pose unmanageable risks if released. For additional information, see 3DaysCount.

By 2005, all Virginia pretrial services agencies were using the Virginia Pretrial Risk Assessment Instrument (VPRAI) to estimate the likelihood of rearrest and failure to appear in court and to assist pretrial officers in making a bail recommendation. All defendants who were arrested and booked into county jails were assessed by pretrial services staff within seven days of booking. In 2007, a validation study was conducted on the tool that showed it appropriately categorized people charged with offenses by risk level and accurately predicted pretrial behavior, but also showed that accuracy could be improved by removing a question asking if a person had outstanding warrants since that question was not a statistically significant predictor of pretrial outcomes.[66] As a result, Virginia removed this question from the tool.

In 2009, Multnomah County (Portland), Oregon’s pretrial services agency began using the VPRAI.[67] The agency compared the VPRAI’s Virginia validation population with a sample of local defendants and found significant differences in age, ethnicity, residence of less than one year, employment during the past two years, and current charge level. After Multnomah’s pretrial agency implemented the VPRAI, the agency validated the assessment against the local population and made appropriate changes to match the county’s defendant population and charging practices.[68]

In October 2012, 73 percent of the 13,000 people in New Jersey’s jails were awaiting trial, and more than 38 percent of the total jail population had the option to post bail, but could not.[71] This meant that many people who were at a low risk of reoffending spent extended time in jail while some people at a high risk who could afford bail avoided detainment. Keeping people in jail pretrial costs counties approximately $6,000 to $9,000 per pretrial defendant.[72]

In 2014, New Jersey passed comprehensive bail reform that went into effect on January 1, 2017. The legislation makes the pretrial process more cost effective for taxpayers and fairer to people who have not yet been convicted of a crime.

To assist with implementation of the law, the state established the “21st Century Justice Improvement Fund” and annually allocates $44 million from court fees for the development, maintenance, and administration of the pretrial services program and a statewide digital court database, as well as the provision of legal assistance to the poor on civil matters.[76] Within the first year of implementation of the bail reform legislation, 81 percent of the 44,319 defendants were released pretrial, and the number of people being held in jail pretrial dropped more than 20 percent.[77] Despite initial successes, the courts warn that funding pretrial services through court fees is unsustainable and recommends a dedicated funding stream through the General Fund.[78]

[72] Report of the Joint Committee on Criminal Justice, March 2014. http://judiciary.state.nj.us/pressrel/2014/FinalReport_3_20_2014.pdf. The report estimates it costs jails an average of $100 per day to house someone pretrial and the average person stays in jail for 60-90 days pretrial.

States authorize use of citations in lieu of arrests

Citation in lieu of arrest has been widely embraced as a law enforcement tool. Nearly 87 percent of law enforcement agencies across the country give officers discretion to issue citations in lieu of arrest for low-level offenses, as defined by the state.[79] A citation is a written order that requires a person accused of committing an offense to appear at a designated place on a specified date, but allows the officer to release the person without transport to the police station, formal booking, and fingerprinting. A national survey showed that law enforcement agencies use citation for nearly a third of all incidents, most often for disorderly conduct, theft, trespassing, driving with a suspended license, and possession of marijuana.[80]

Twenty-four states have created a presumption to issue citations in lieu of arrest for misdemeanor crimes or petty offenses, while four states—Alaska, Louisiana, Minnesota, and Oregon—have expanded the law to permit citations for certain felony offenses.[81] State laws guide the circumstances under which a citation can be issued, which are often determined by the class of the alleged offense and are subject to exceptions:

The Texas Indigent Defense Commission (TIDC) provides financial and technical support to counties to develop and maintain high-quality, cost-effective indigent defense systems. The Bexar County Public Defender’s Office (BCPDO), in San Antonio, was awarded a grant from TIDC in 2015 for the public defender to provide representation upon the first appearance before a magistrate for people who have mental illnesses and are determined to be indigent. Between 2015 and 2017, the number of people granted mental health personal recognizance bonds when counsel was present more than tripled.[82] Clients who were represented by the BCPDO upon their first appearance before a magistrate were also observed to have a greater incidence of judicial and treatment compliance than those not represented by counsel.[83]