There are four vehicles states can use to reinvest in public safety priorities: upfront investments, annual appropriations, legislatively-mandated investments, and intra-agency and interagency allocations. States often find they need to employ more than one reinvestment strategy over a number of years based on a state’s budgetary landscape.

At times, an agency or entity simply does not have the staffing or resources to properly enact a policy change. In these instances, upfront investments are necessary to help jumpstart new practices and potential savings down the line. However, upfront investments are rarely sufficient to implement a broad-based policy package; states must look to additional reinvestment strategies to ensure sustainability of policy changes.

Many states choose to reinvest using annual appropriations. Yet, just because a state reinvests funding in public safety priorities in this year’s budget does not guarantee it will be in next year’s budget. States must find creative ways to ensure that policymakers remain committed to reinvesting in those public safety priorities after that initial investment. Some states establish funding formulas that set reinvestment amounts based on how much the state has saved or averted during a specified time period due to policy changes. This approach increases the likelihood that a percentage of the amount saved or averted is allocated to the state’s public safety funding priorities instead of reverting to the general fund, but the policy changes need to initially produce savings or averted costs, and states need to accurately measure the impact of the policy change.

Further, policy changes may reduce costs for one agency, but increase costs for another. In these instances, a legislature may choose to transfer funding from one agency to another, yielding a cost-neutral approach. Agencies may also elect to shift funds within departments or across agencies to address agency priorities. 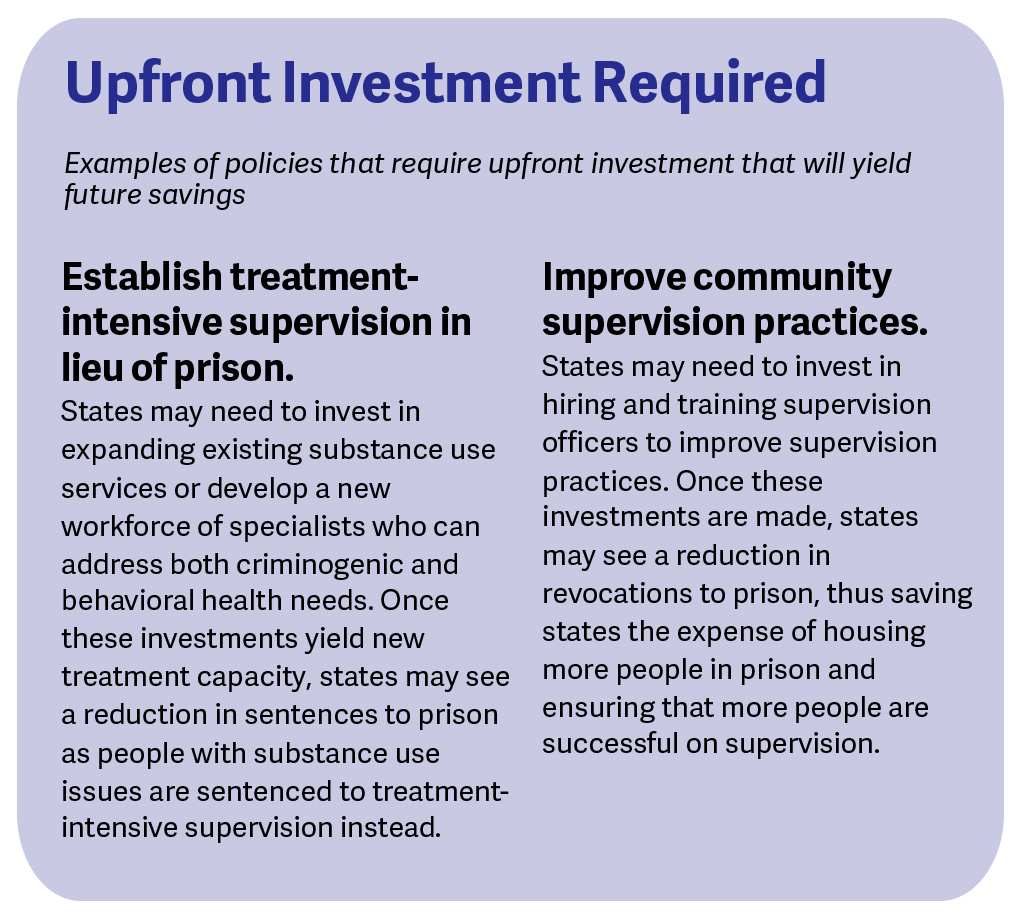 States often use one or a combination of four key methods to reinvest in public safety strategies. 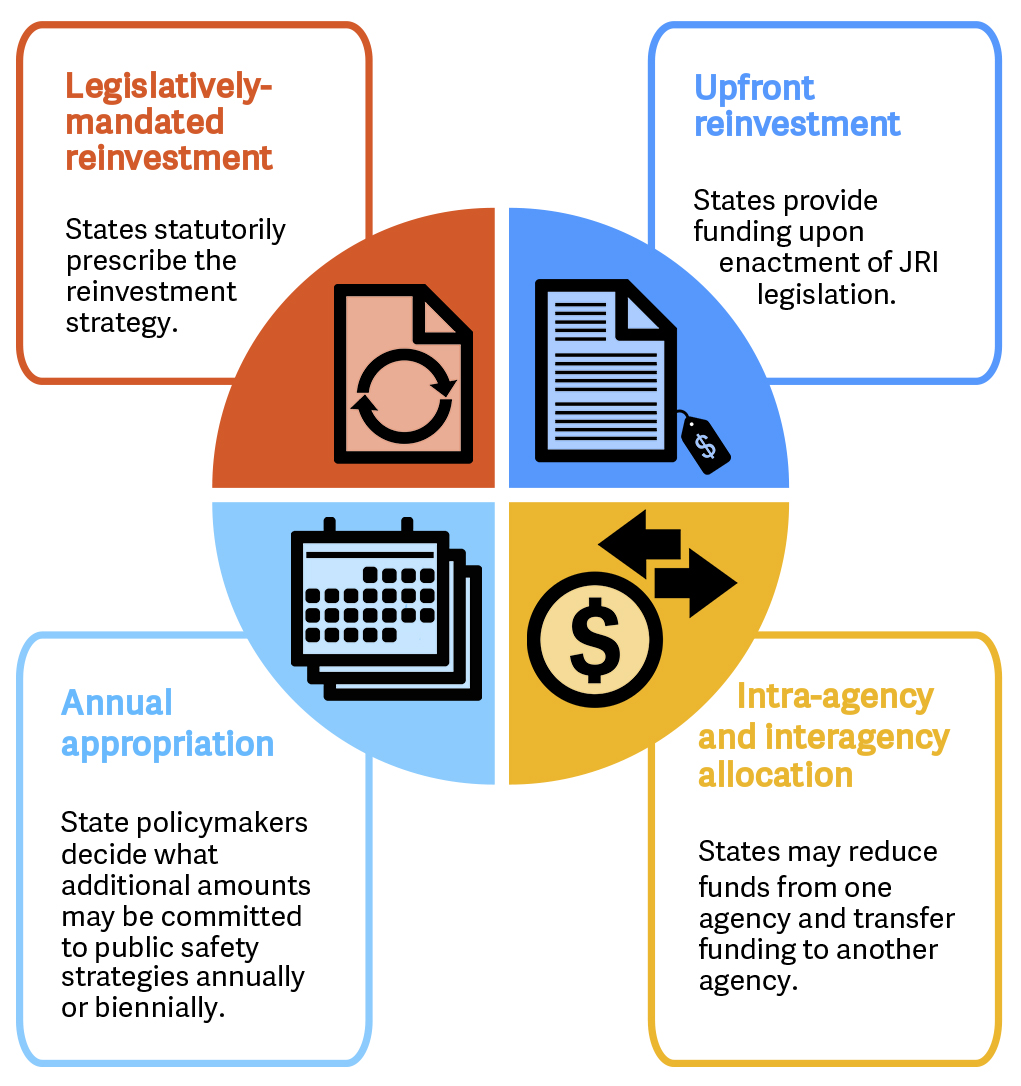 At a time when budgets were cut dramatically amid a fiscal crisis, Alabama appropriated more than $16 million in FY2016 and an additional $26 million in FY2017 to jumpstart implementation of its 2015 Justice Reinvestment legislation to hire and train new probation and parole officers, expand and improve community-based behavioral health treatment, and enhance victim notification. The state invested an additional $53 million in those efforts in FY2018 and FY2019.

Shortly after enacting Justice Reinvestment legislation in 2014, Idaho state policymakers made upfront investments for FY2015, including more than $4 million in funds for new supervision officer positions and training, community-based substance addiction and cognitive behavioral treatment programs, and IT staff for both the Idaho Commission of Pardons and Parole and the Idaho Department of Corrections.

Four years after enacting Justice Reinvestment legislation (Act 196 and Act 122) in 2012, Pennsylvania can point to significant improvements in its criminal justice system. The state has reduced inefficiencies in its parole and corrections systems; developed responses to major parole violations that include short periods of incarceration followed by supervision and treatment, as necessary; and made changes to state-funded community corrections programs. As a result of these and other policies, the state has averted millions of dollars in corrections costs and seen its prison population decrease by more than 1,800 people between June 2012 and December 2015. These outcomes have enabled the state to reinvest a portion of those savings—nearly $25 million—in public safety strategies since 2012.

Pennsylvania took a groundbreaking approach to reinvestments by establishing the legislature’s reinvestment priorities in statute. A statutory formula in Act 196 calls for 75 percent of the savings generated by the Justice Reinvestment policies in FY2013–14, 100 percent of the FY2014–15 savings, and 25 percent of the FY2015–16 and FY2017–18 savings to be distributed to the Pennsylvania Department of Corrections, Pennsylvania Board of Probation and Parole, and the Pennsylvania Commission on Crime and Delinquency to fund programs and activities that improve the delivery of criminal justice services within the state. The act requires that the first $1.4 million spent each year through FY2017–18 be used for the development of a presentencing risk assessment tool, expansion of programs for victims of juvenile offenders, communication through the statewide automated victim information and notification system, and victim services automated data collection and reporting projects. After the $1.4 million investment threshold is met, reinvestments must be allocated for other initiatives, including grants for local law enforcement, incentives for county jails, and improvements to county probation. Based on the statutory formula, Pennsylvania increased its reinvestment amount from $42,000 in FY2013–14 to almost $11.3 million in FY2017–18.

To learn more, see Unique Pennsylvania Law Drives a Formula for How Prison Savings and Reinvestments are Calculated.

In 2017, Louisiana state leaders enacted Justice Reinvestment legislation, which requires the Department of Corrections to calculate savings each fiscal year and report them to the legislature. After savings are calculated, 70 percent of savings in the first year, and 50 percent in subsequent years are to be reinvested in

The legislation requires the Department of Corrections and the Louisiana Commission on Law Enforcement and the Administration of Criminal Justice to collect and analyze data on the impact of policy changes and the savings from reductions in the prison population, and report it to the legislature and the public each year.

Despite annual state corrections expenditures of more than $1 billion in Colorado, crime rates and criminal justice involvement remain high in many neighborhoods in the state. With law enforcement already stretched thin and prisons and jails at capacity, state legislators are trying a new public safety strategy.

In 2017, the legislature passed a bill (HB17-1326) that is projected to cut costs by (1) reducing the number of ways that people on parole can be revoked to prison for technical violations; (2) capping the amount of time certain people can spend on parole; and (3) creating a more efficient parole release planning process. The bill reduces Department of Corrections (DOC) spending by $5.8 million in FY2017–18 and increases appropriations to the Department of Local Affairs (DOLA) by $5.8 million in FY2017–18, reinvesting in crime-prevention initiatives for local communities, creating economic opportunity, and promoting community well-being.[61] DOLA will provide funding in two ways: