Research shows that providing the most intensive supervision and treatment for people who are at a high risk of reoffending results in the greatest reductions in recidivism. On the other hand, intensive interventions for low-risk people are not an effective use of resources and often increase their likelihood of reoffending.[18]

Limited funding and the large number of people on probation and parole, many with lengthy supervision terms, present a challenge to supervision agencies trying to reduce recidivism. Far too often, officers have high caseloads that limit their ability to focus their attention on people who are most likely to reoffend and help them change their behavior. While there is no universally accepted standard for caseload size, the number of people on an officer’s caseload is important. Officers must have caseload sizes that allow them to effectively hold people on supervision accountable for their actions and facilitate behavior change. Supervision agencies need to conduct workload studies to evaluate their caseload sizes to determine whether adjustments are needed. Without manageable caseload sizes that allow officers to provide tailored supervision, efforts to improve supervision practices will fall short of recidivism-reduction goals.

To help supervision agencies establish appropriate caseload sizes, legislators and supervision agencies need to establish policies that affect how long and how intensively people are supervised. Supervision terms vary widely across the country and range from several months to as long as a lifetime. The likelihood of recidivism is highest within the first year of release and decreases in each subsequent year, which is why supervising people in the initial months after release is important to increase public safety, but supervision terms beyond three to five years yield limited results. [19] To cost-effectively ensure that people are supervised when they are most likely to reoffend, some states have reduced maximum terms on supervision; established mechanisms to reduce supervision terms for people who comply with conditions and pay fines, fees, and restitution; and created caseloads where people who are less likely to reoffend receive less intensive supervision.

In 2015, states spent more than $40 billion on prisons, or nearly 10 times the amount spent on community supervision, yet state probation and parole populations are three times the size of state prison populations. 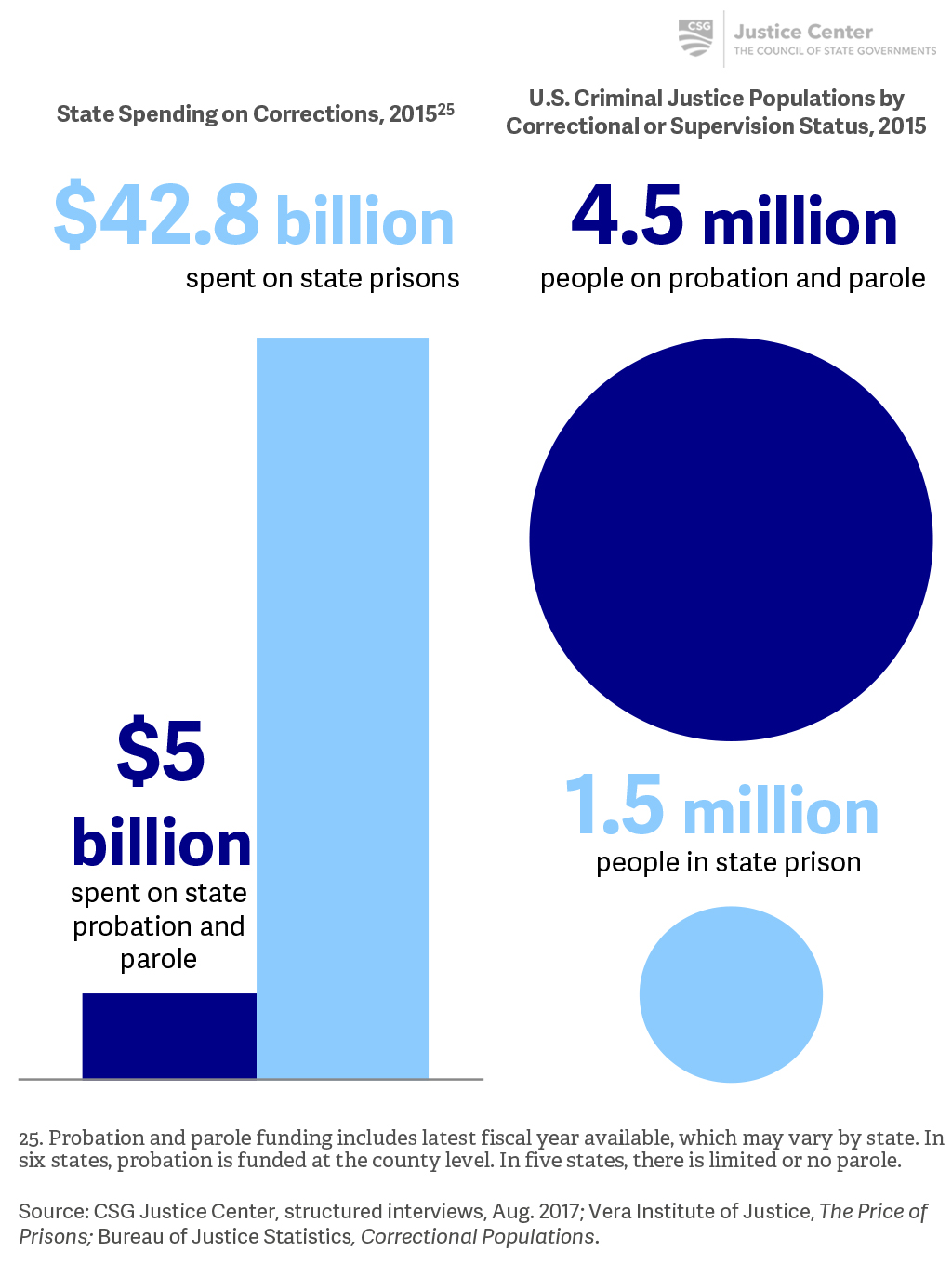 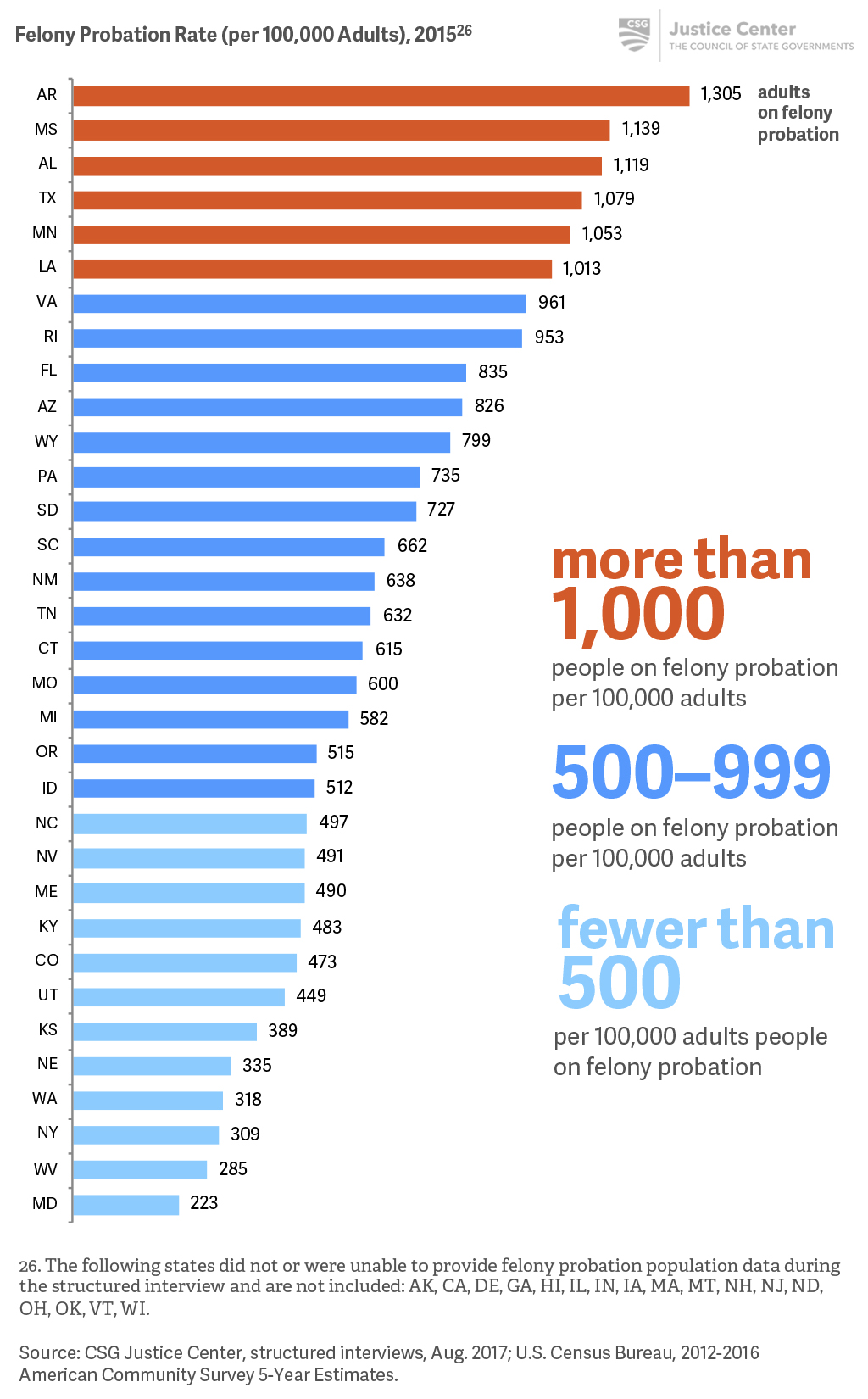 Most states have caps on felony probation terms and/or mechanisms to shorten them. Such policies allow states to focus supervision resources when people are most likely to reoffend. 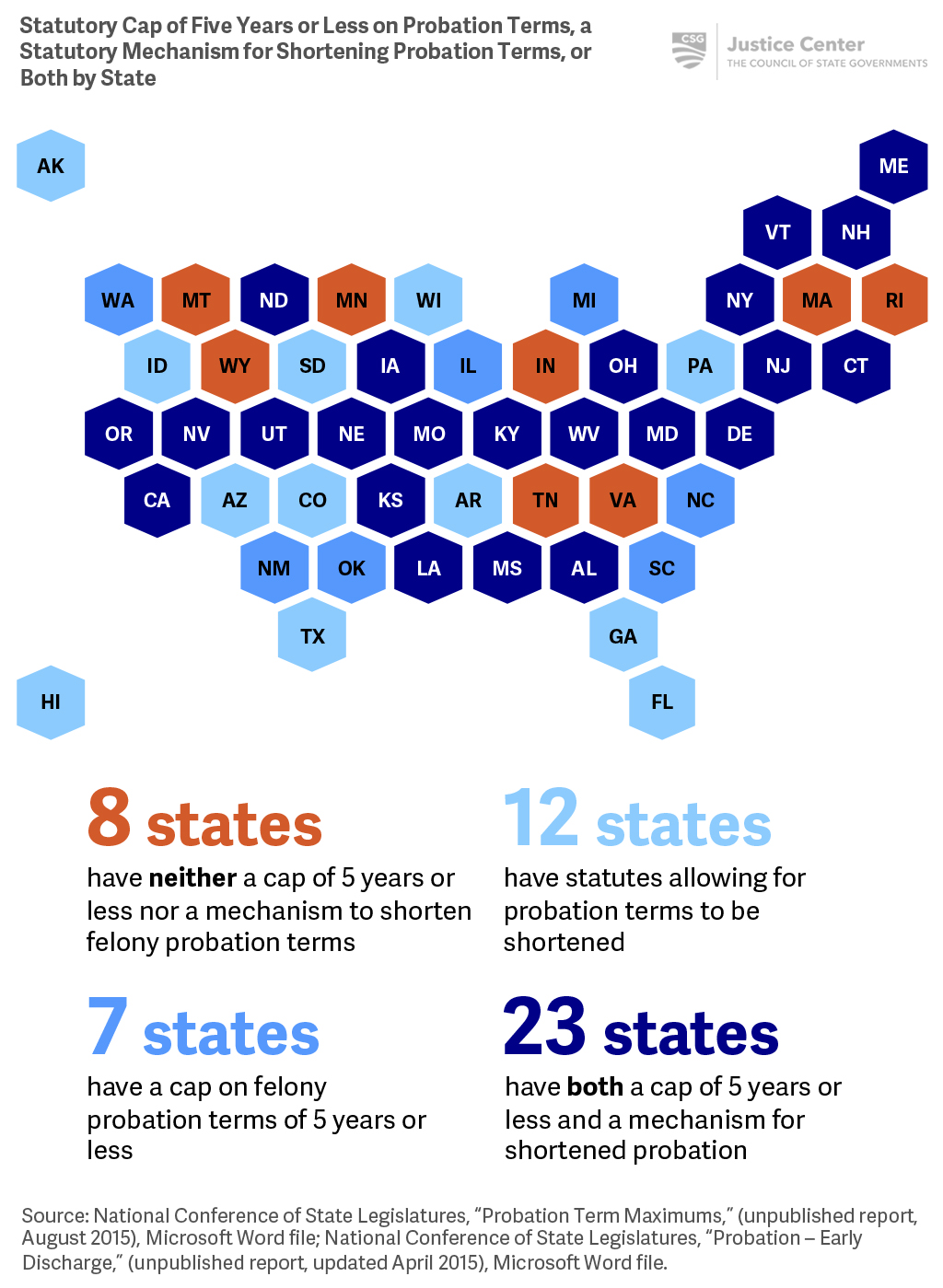 Rearrest rates for people released from prison in 30 states over five years shows that the bulk of recidivism occurs within the first year of release. 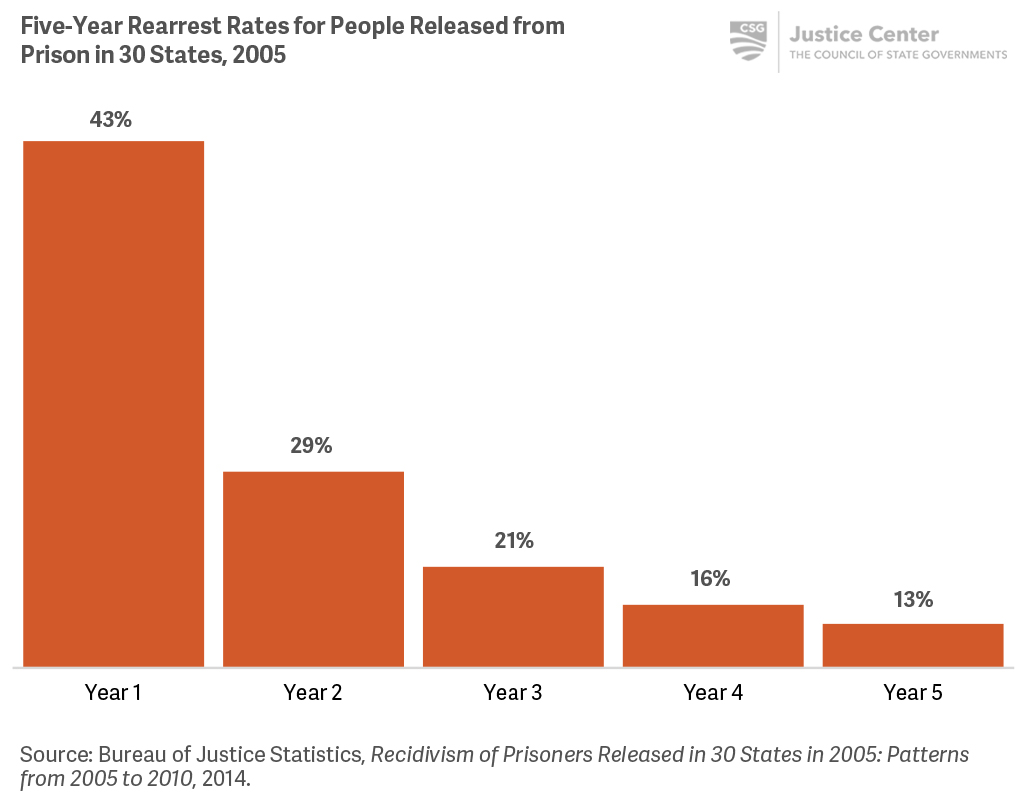 States focus supervision resources on people most likely to reoffend

Some states fund supervision at levels that keep caseloads low enough to enable officers to work intensively with people at a high risk of reoffending. For instance, in Texas, parole caseload goals range from a low of 14 people per officer for the most intensive GPS supervision, to a high of 75 people per officer for average typical caseloads. Caseloads that are limited in size allow officers to more meaningfully engage with the people under their supervision and help them change their behavior. Minnesota statutorily prescribes that caseloads for its intensive supervision program be no more than 30 people per two officers.[20] The limited caseload allows officers to closely supervise people at a high risk of reoffending following release from prison, and ensures that they abide by supervision conditions.

Sometimes states need to hire additional officers to reduce caseloads so that officers can focus on people who are most likely to reoffend. For example, in Alabama, probation and parole caseloads averaged close to 200 cases per officer in 2014. After reinvesting $38.5 million from FY2016 to FY2019 to hire and maintain 100 new officers, caseloads in Alabama dropped to an average of 110 actively supervised people per officer. Alabama also limited the number of high-risk people on an officer’s caseload to 20.

Some states limit the amount of time a person is actively supervised by a probation or parole officer before being transferred to an administrative monitoring status. Some states establish caseloads or remote reporting systems for low-risk people.

Given that people are most likely to reoffend early in their supervision term, states are creating opportunities to reduce the amount of time people spend on supervision beyond the period when they are most at risk.[21] Some states do this by reducing the length of probation terms for people convicted of certain offenses.

[23] When a court sentences a person to probation, the period is ten years for class A felonies, five years for certain class B and C felonies, four years any other class B or C felony, and one year for most misdemeanors, unless the court specifies a shorter period of probation. §706-623 Terms of probation.

[24] Previously, if sentencing a person to probation, a judge had to sentence a person convicted of a Class A or unclassified misdemeanor at three years, and a Class B felony for five years.

Additionally, some states permit people to earn time off their sentence as an incentive for people to comply with conditions of supervision and participate in programming to address their criminogenic risk and needs. Further, it can reduce supervision caseloads, allowing probation and parole officers to implement individualized case plans that help people most likely to reoffend develop skills to succeed on supervision and in the community. Many states, such as Arizona, Mississippi, Missouri, Nevada, and South Dakota, permit people to reduce their time on supervision by earning credits for complying with supervision conditions, such as passing drug tests or attending treatment or recidivism-reduction programs. Delaware permits people on probation to earn up to 30 days credit for 30 days of complying with conditions of supervision, not to exceed half of their probationary period. Georgia requires a behavioral incentive date to be set at sentencing for people with first-time felony convictions so that they can be released from supervision within three years if they comply with conditions, pay any restitution, and avoid additional arrests. The Department of Community Supervision must petition the court for early termination of probation.

Improve the effectiveness of supervision to reduce recidivism.

Improve supervision workforce practices, such as hiring, training, and evaluation.