At least 95 percent of people in state prisons will eventually be released.[39] Exactly when they are released often depends upon release decisions made—at least in part—by a state’s parole board.[40] Decisions by parole boards to increase or decrease the number of people released from prison can have a significant impact on the size of a state’s prison population. Far too often, corrections agencies and parole boards grapple with three common challenges that result in high costs due to increased lengths of stay and increase the chance of releasing people from prison without supervision:

Inefficiencies that slow parole processing and delay the release of eligible candidates to parole supervision increase the likelihood of people serving their entire sentence in prison and, as a result, returning to their communities without supervision or support. The likelihood of recidivism is highest within the first year of release and decreases in each subsequent year, which is why supervising people in the months after release is an important tool to increase public safety, but supervision terms beyond three to five years yield limited results.[41]

To ensure that people are ready for parole at their initial parole hearing, corrections departments must assess people for risk of recidivism and criminogenic needs and prioritize risk-reduction programming and treatment for those who are at a high risk of reoffending and have the greatest needs. Further, corrections departments need to ensure availability of programs and timely placement of people into these programs. This allows people to complete programming milestones by their initial parole hearing and continue programming in the community as needed.  Clear guidelines can also help corrections agencies coordinate with parole boards on case planning to prepare people for release. Corrections agencies and parole boards need to collaborate to identify risk-reduction requirements for parole and develop reentry plans that support timely release.

To increase transparency and consistency in release decision making, many parole boards are also adopting guidelines that account for factors that demonstrate a person’s readiness for release, including risk of reoffending and criminogenic needs, offense severity, program completion, and institutional behavior.

States have taken many other steps to reduce delays in release decision making. Some have established goals to release a certain percentage of people by risk level each year, releasing more people who are at a low risk of reoffending than those who are at a high risk. Other states require people to be released within a specified period after their initial parole date absent compelling circumstances to detain them further. Some states are actively supporting reentry efforts that connect people to supports such as housing, treatment, and employment upon release, without which, a person’s release into the community may be delayed.

The majority of states require a period of post-release supervision for people leaving prison. 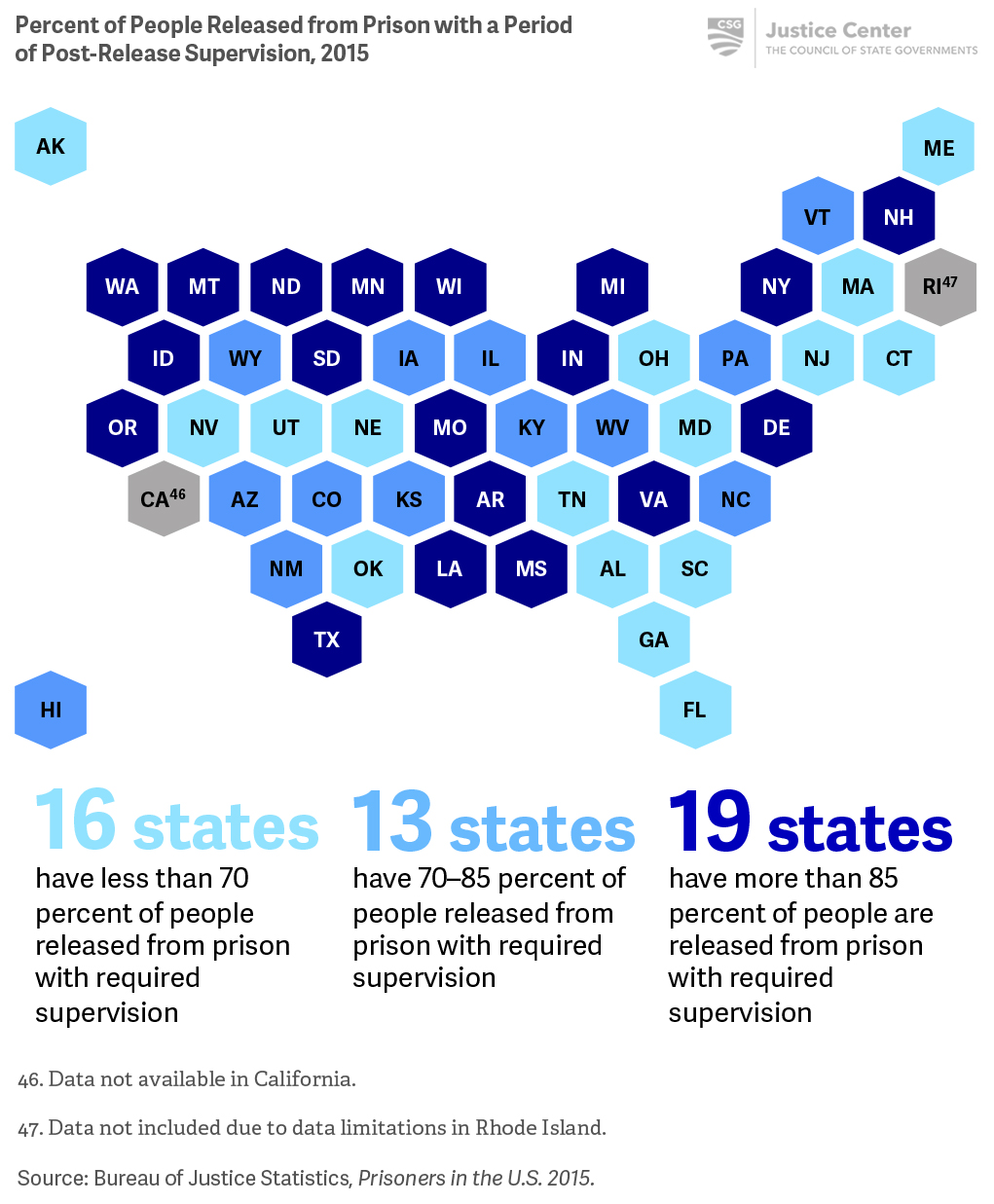 In 2014, Idaho enacted Justice Reinvestment legislation requiring the Commission of Pardons and Parole (Commission) to establish clear guidelines and procedures that aimed to reduce the amount of time that people convicted of property or drug offenses spent in prison beyond their minimum sentence, while ensuring that the Commission retains discretion in individual cases. The legislation requires the Idaho Department of Correction and the Commission to submit annual reports to the legislature and governor that document the percentage of people sentenced to prison for property and drug offenses who are released prior to serving 150 percent of their minimum sentence. In 2017, approximately 87 percent of people convicted of property and drug offenses were released prior to serving 150 percent of their minimum sentence, compared to 75 percent in 2014.[42]

In 2015, Alabama enacted Justice Reinvestment legislation requiring its parole board to follow structured parole guidelines that take into account risk of reoffending and criminogenic needs, institutional conduct, and prison programming, when making release decisions. This structured decision-making process helps the board make more consistent, transparent, and efficient parole decisions. Further, parole guidelines can help the board track releases by risk level to understand who is being released close to their minimum parole eligibility date and who is not.

In the first six months of implementing these guidelines, the parole grant rate steadily increased, and the majority of people being released were assessed as being at a low or moderate risk of reoffending.[43]

[43] CSG Justice Center analysis of Alabama Board of Pardons and Parole data.

Between 1985 and 2005, the Texas prison population grew 300 percent, and by 2007, the prison population was projected to grow by an estimated additional 17,000 beds by 2012, at a cost of $2 billion. Increased probation revocations, reduced treatment capacity, and reduced parole approvals contributed to the state’s prison population growth. Parole grant rates were much lower than the parole board’s own guidelines recommended and many people’s release to parole was delayed due to a lack of in-prison and community-based treatment programs.

To address the drivers of prison growth, Texas reinvested $241 million in the 2008–2009 biennium to increase options for responding to probation and parole violations and increase substance addiction and mental health treatment capacity. These investments allowed the state to reduce release delays for people at a low risk of reoffending and increase the percentage of people approved for release to parole. Since 2007, Texas has averted more than $3 billion in corrections costs, and the prison population fell from 152,671 people in 2007 to 145,409 in 2017, allowing the state to close 8 prisons.[44] The reduced prison population did not result in more crime; in fact, crime rates fell 31 percent between 2007 and 2016.[45]

Promote success on supervision and use proportionate responses to respond to violations.