Working together, state and local leaders, criminal justice agencies, and stakeholders can establish recidivism-reduction goals and develop practical, data-driven plans to achieve them. By establishing clear recidivism definitions and procedures for collecting, measuring, and publishing data, state and local criminal justice agencies can ensure that data is available to determine whether their recidivism-reduction strategies are achieving the desired impact.

The U.S. Department of Justice’s Bureau of Justice Assistance’s Statewide Recidivism Reduction (SRR) grants are a Second Chance Act program that helps states reduce recidivism by implementing comprehensive changes to policy and practice. For example, through its SRR grant in 2015, Virginia developed state-level strategic plans to improve recidivism outcomes for people at a moderate to high risk of reoffending who return to the community after incarceration. Beginning in 2016, Nevada DOC began using its SRR grant to take a comprehensive approach to reducing recidivism by rewriting reentry-related policies, assessing correctional and community-based treatment programs for their adherence to evidence-based practices, and building staff capacity through training in core correctional practices. For additional information, see Second Chance Act Statewide Recidivism Reduction Program.

Half of states have committed to reducing recidivism through Statewide Recidivism Reduction grants. 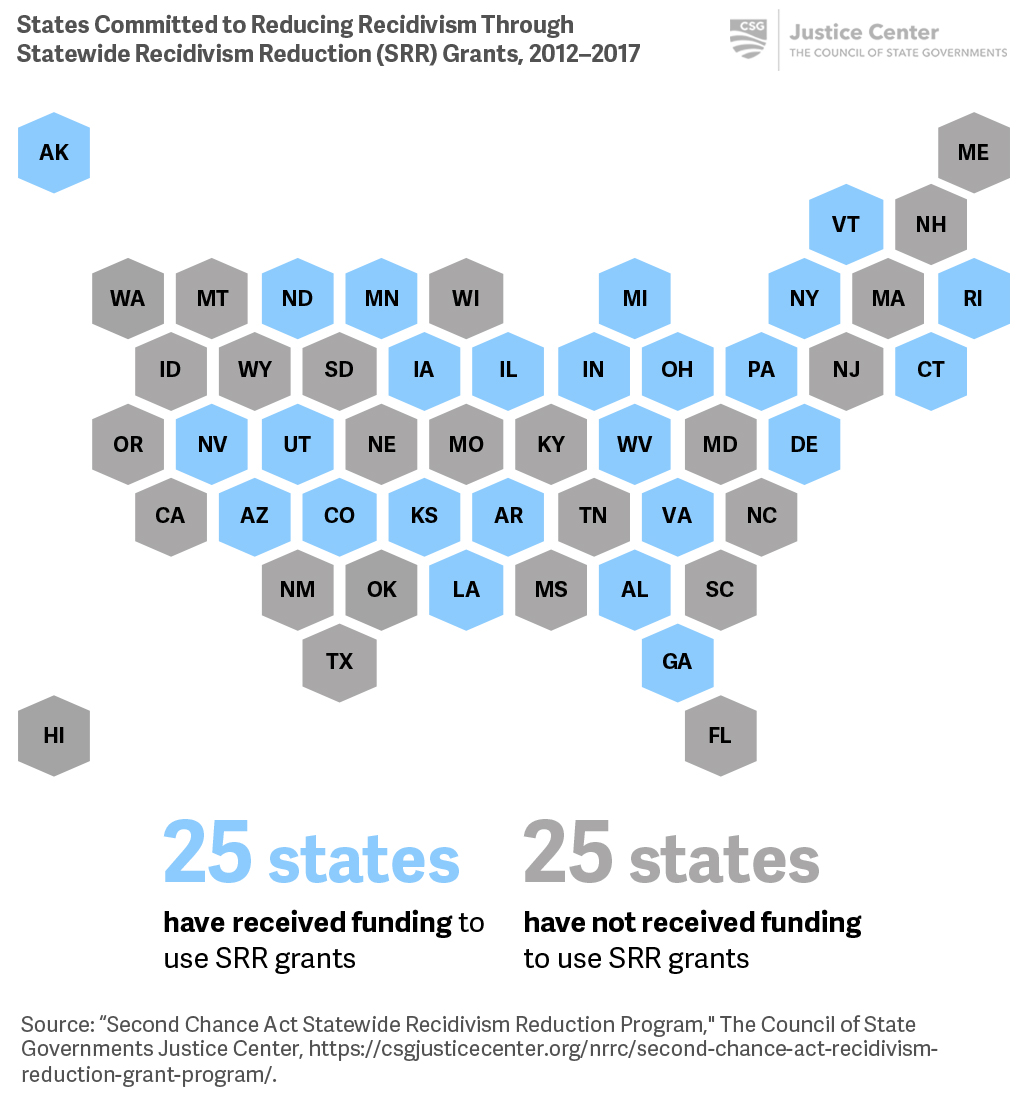 Snapshot of national progress in reentry

The National Reentry Resource Center released a brief in 2017 that highlights advancements made in state and local governments’ approaches to reentry and reducing recidivism since the passage of the Second Chance Act in 2008. It underscores the involvement of diverse constituencies and systems in these efforts, the field’s increasing understanding and application of what works to reduce recidivism, and promising recidivism outcomes in a number of states. Finally, this brief points to the critical work that lies ahead to transform systems, continue to improve reentry for people returning to the community after incarceration, and reduce recidivism in state and local jurisdictions across the country. For additional information, see Making People’s Transition from Prison and Jail to the Community Safe and Successful.

As recidivism reduction has become a priority for corrections agencies and state legislatures, more and more states have begun setting recidivism-reduction goals. Aiming to reduce recidivism by 10, 20, or 30 percent helps states prioritize limited resources and create benchmarks against which to measure progress. For example, in 2017, Massachusetts determined that reducing recidivism statewide by 10 percent would require an investment in behavioral health services, improvements to recidivism-reduction programs within correctional institutions, and improvements to post-release community supervision practices. The recidivism-reduction goal and the associated allocated resources helped set clear expectations and helped agencies craft plans to improve practices, training, and policies to achieve the goal.[13]

Iowa targets recidivism-reduction efforts to people most likely to reoffend

To achieve these results, the state developed a plan to ensure statewide implementation of evidence-based practices (EBPs) shown to reduce recidivism, including improving prerelease planning; training staff; establishing a quality assurance plan; and updating workforce development policies to support the hiring, promotion, and retention of staff trained to apply EBPs. A collaborative steering committee is guiding and overseeing the implementation process.

Iowa Department of Corrections (IDOC) developed an in-house data dashboard to track performance measures at many levels: by client, unit, and case management levels; across agency or institution; or statewide measures. In adopting the data dashboard, IDOC has a more streamlined and transparent reporting process.

Use measures that permit more timely analysis in addition to cohort-based measures.