When law enforcement and supervision agencies, courts, jails, and prisons don’t share data, their ability to respond appropriately to people who commit crimes and who are victimized is impaired. Without data sharing, criminal justice agencies also are limited in their ability to conduct analyses to identify crime and recidivism trends. Only by updating systems so that information on crime, arrest, and victimization can be collected and shared among criminal justice agencies and with the public and policymakers, can state and local leaders ensure that resources are used wisely and people are held accountable for their criminal behavior.

To improve data sharing, criminal justice agencies should use a unique state identification (SID) number across all systems to track a person’s movement through the entirety of the criminal justice system and determine whether a person returns. Using SID numbers can help ensure the most accurate matching across criminal justice data systems.

In addition to using a SID number, criminal justice agencies need to acquire  technology that has the capacity to easily share information and establish processes to share data between agencies. With these components in place, all criminal justice agencies can access information that can help them improve how they respond to people in the criminal justice system, as well as analyze crime, arrest, and victimization trends over time to strengthen policies and practices that reduce recidivism, repair harm, prevent offenses, and build trust in communities. 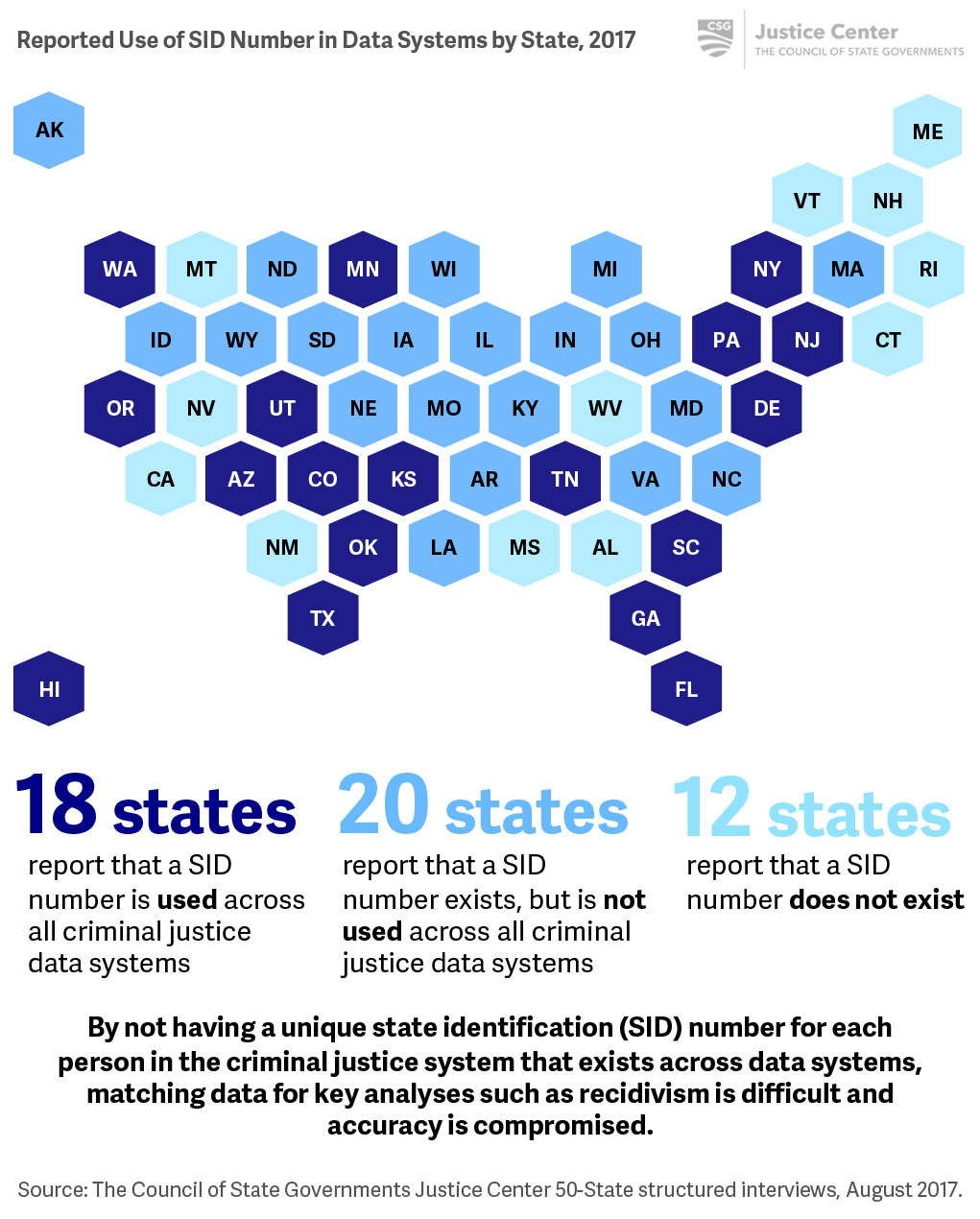 More than half of states report having systems that give supervision officers the ability to determine when people on their caseloads are arrested, but this is not necessarily done automatically. 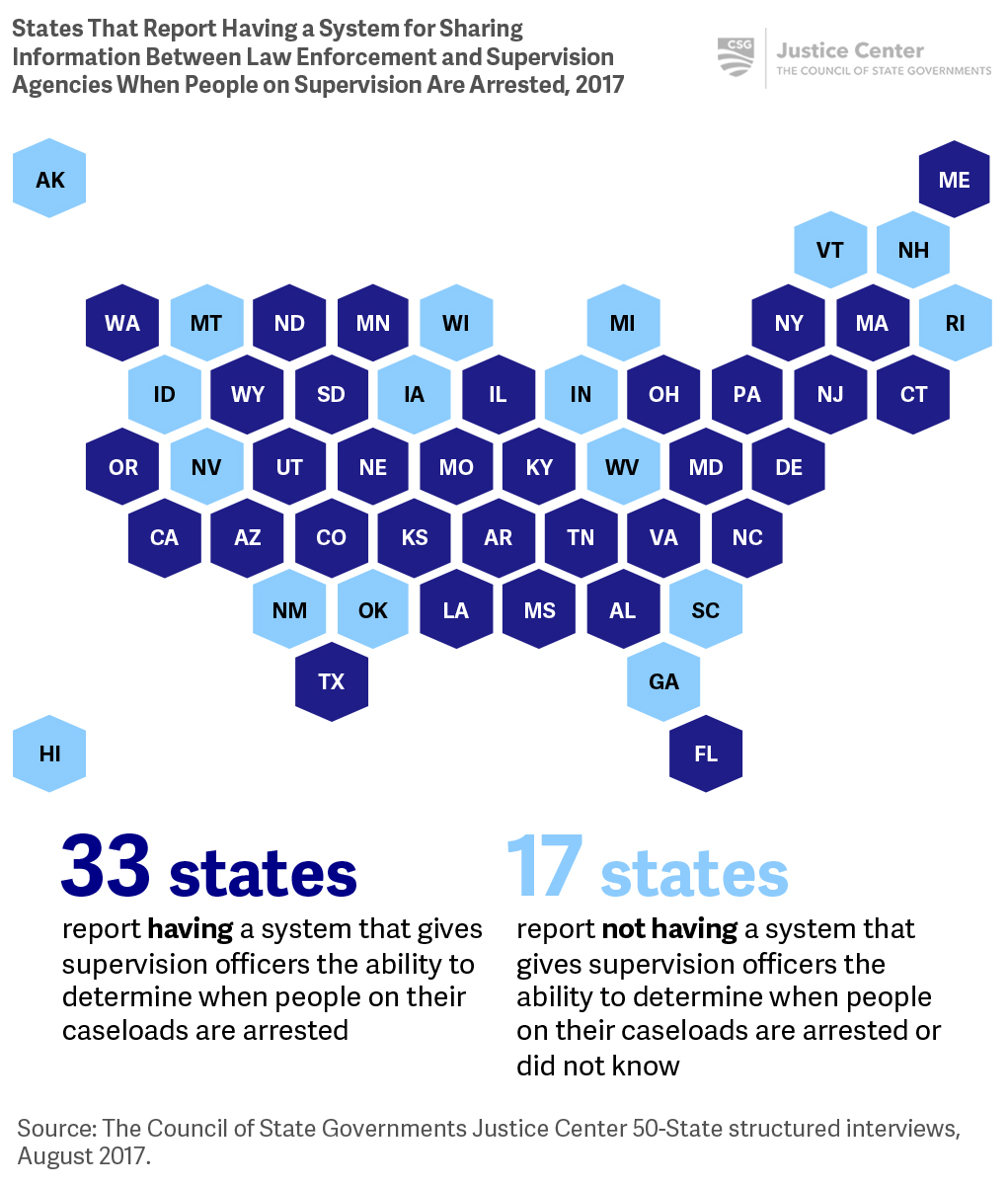 More than half of states report having systems that give law enforcement the ability to determine supervision status when a person is arrested, but this is not necessarily done automatically. 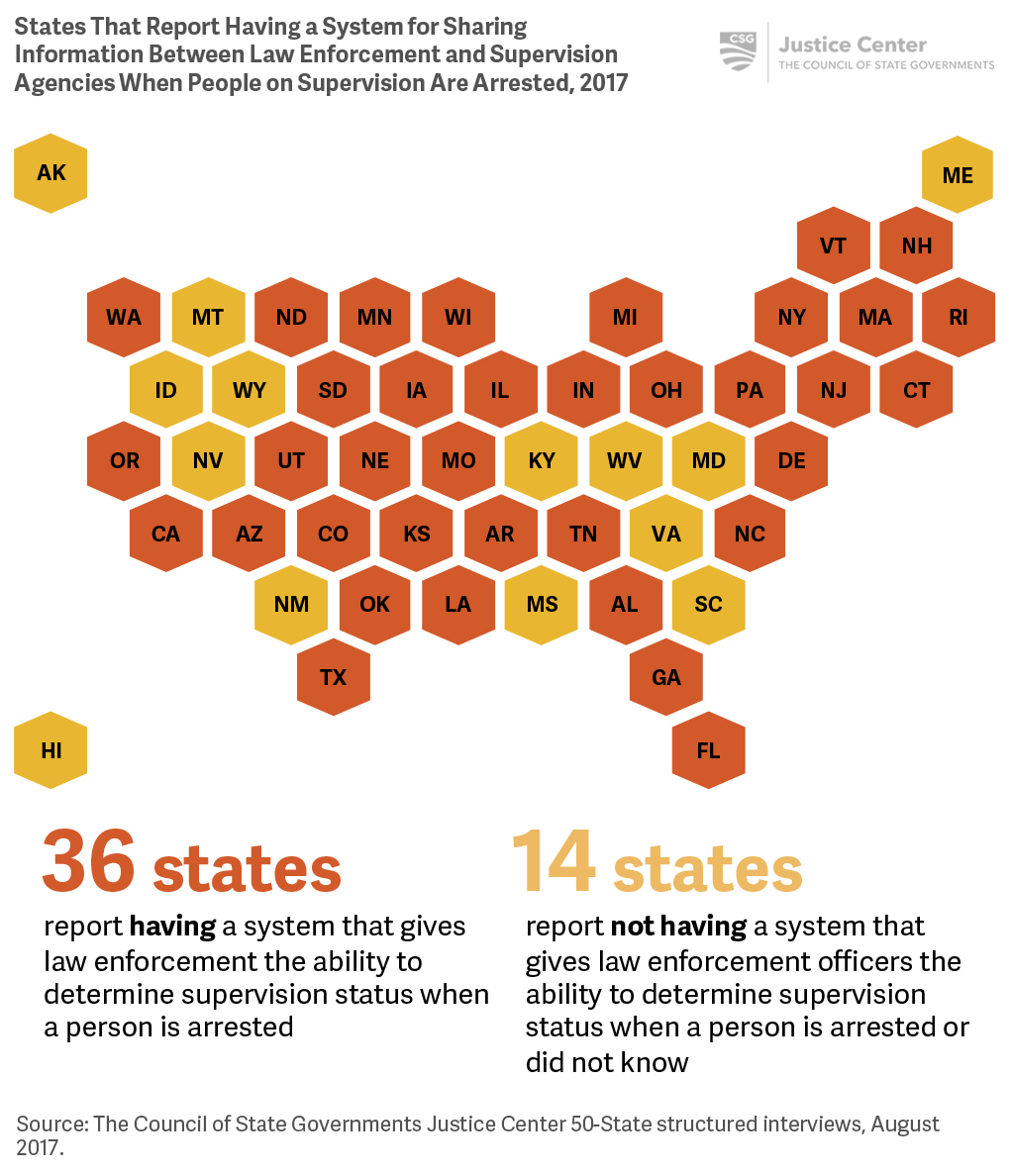 One question that law enforcement and corrections officials often ask, but rarely can answer, is to what extent do people on probation and parole contribute to crime, as measured by arrests? Limited data sharing between supervision and law enforcement agencies and a lack of universal SID numbers makes this analysis difficult. Some jurisdictions, however, have data systems in place that enable them to answer this question.

New York’s Division of Criminal Justice Services annually publishes arrest reports on the number and percentage of arrests of people for misdemeanors and felonies who are on probation and parole supervision, both statewide and by county. The report also shows the number of arrests for felonies and misdemeanors and violent and drug offenses of people on probation and parole supervision. In 2016, people on parole and probation accounted for 2.8 percent and 4.7 percent, respectively, of all arrests statewide.[26] When police officers arrest someone who is on supervision, the law enforcement agency typically notifies the probation agency. New York City’s probation department uses the metric as part of its ongoing performance monitoring.

Even when agencies don’t share information regularly, states may be able to use data from different agencies to identify how people on supervision contribute to crime. In California, the chiefs of the Los Angeles, Redlands, Sacramento, and San Francisco Police Departments commissioned an analysis in 2010 to determine to what extent people on supervision contributed to crime. Researchers amassed more than 2.5 million adult arrest, probation, and parole supervision records maintained by 11 different agencies over a 42-month period stretching from January 1, 2008 to June 30, 2011.

Jurisdictions across the country are taking steps to make their data more accessible for state leaders and the public by making information available online. Most often, state and local criminal justice agencies place reports summarizing crime, arrest, or supervision trends on their agency’s websites. Some states, such as Colorado and Pennsylvania, go even further by presenting this information with interactive graphics, while others, such as Washington, permit users to download data for individualized analyses. California created the OpenJustice data dashboard that explains key criminal justice indicators at the state and county level and provides users with the ability to download data for further analysis. In addition to showing crime and arrest trends, the website provides detailed information on deaths of people while in custody of law enforcement or a corrections agency, use of force by law enforcement, and demographic information about the victims of homicides.

States can also help local criminal justice agencies learn about best practices and share lessons learned from other jurisdictions. For example, the Oregon Knowledge Bank is a statewide resource that highlights innovative programs operating in the state, as well as research about policing, community supervision, and public safety programs.