Sentencing policies and practices play a significant role in prison population growth because they determine which offenses are eligible for a prison sentence and how long those sentences should be. As a result, states are increasingly adopting sentencing policies that prioritize prison space for people convicted of serious and violent offenses while using probation for people convicted of lower-level, nonviolent felony offenses. Still, more than one-third of people in state prisons are there for property or drug offenses, suggesting that many states have the opportunity to sentence more people to probation for lower-level, nonviolent felony offenses instead of to state prisons.[17]

Since 2000, at least 37 states have raised the threshold at which the value of goods stolen in a theft constitutes a felony, and the 30 states that did so between 2000 and 2012 found that the change had no impact on the overall property crime or larceny rates.[18] Some states have also increased the threshold at which drug possession is a felony, reduced the period of incarceration for drug possession, or revised sentencing guidelines to send people convicted of drug possession to probation instead of prison. Studies have found no relationship between state drug imprisonment rates and three indicators of state drug problems—self-reported drug use, drug overdose deaths, and drug arrests—suggesting that policy approaches other than incarceration may be more cost-effective responses to people convicted of low-level drug offenses.[19]

In 16 of 39 states, at least 40 percent of people in prison had been convicted of property or drug offenses. 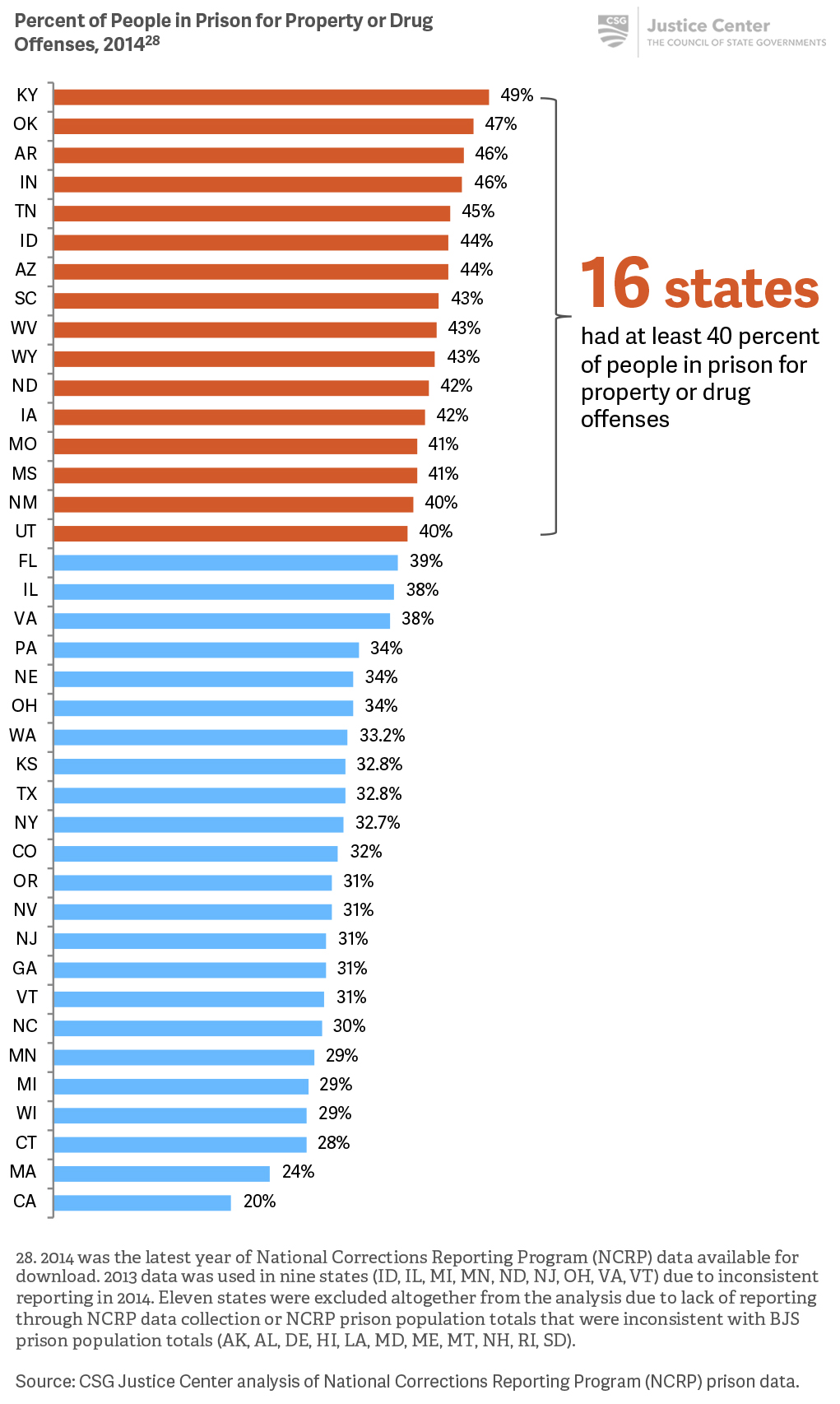 In 2009, the Indiana General Assembly formed the Criminal Code Evaluation Commission (CCEC) and tasked it with reviewing the state criminal code, which had not been overhauled since the 1970s. Between 2010 and 2012, reviewers checked the code with the following objectives in mind:

In 2010 and 2011, the CSG Justice Center worked with Indiana policymakers to analyze criminal justice data and interview stakeholders from across the criminal justice system. This led to the development of data-driven policy options designed to reduce corrections spending and increase public safety, which the CCEC supported. In 2011, the state introduced legislation based on those policy options, but no legislative action was taken during that session and the state’s official participation in the Justice Reinvestment Initiative (JRI) ended.

The legislation that passed included recommendations from the JRI process and additional recommendations from CCEC. The legislature provided funding to help Indiana counties prepare for the additional number of people convicted of Level 6 offenses serving their sentences in local communities.[20] Between FY2016 and FY2018, the Department of Corrections provided $50 million in grants to fund community corrections programs, probation departments, court recidivism-reduction programs, jail treatment services, and prosecutor diversion programs in hiring and training additional staff, providing behavioral health treatment and cognitive behavioral programs, and purchasing equipment.[21] The state also created a grant program, known as Recovery Works, to increase the availability of behavioral health treatment and recovery services in the community for people without insurance coverage who may otherwise face incarceration. The legislature provided $40 million for Recovery Works between FY2017 and FY2018.[22] Between November 2015 and May 2017, 12,040 people were enrolled in Recovery Works and the majority of referrals to the program came from probation and parole agencies.[23] A recent study found that people who remained in the program for at least six months had increases in rates of employment and insurance coverage and decreases in self-reported arrests.[24]

In 2015, the legislature also established the Justice Reinvestment Advisory Council (JRAC) to conduct a state-level review and evaluation of local corrections programs, including community corrections, county jails, and probation services, and the processes used by the Department of Correction and Division of Mental Health and Addiction in awarding grants. JRAC is charged with reporting annually on the impact of the grant-funded programs. Their latest report can be found here.

In 2010, South Carolina enacted sentencing and corrections legislation designed to protect public safety, hold people accountable for their actions, and control prison growth. The legislation strengthened supervision for people on probation and parole, improved release decision making, and made sentencing changes to prioritize prison space for people convicted of the most serious offenses and repeat offenses.

The legislation increased penalties for certain violent crimes, as well as revised penalties for certain property crimes by increasing the felony property crime threshold from $1,000 to $2,000 for all felony property crimes. The legislation permits people convicted of non-trafficking drug offenses to be eligible for probation and parole and receive good conduct credits; equalizes penalties to erase the disparity between crack and powder cocaine possession; clarifies proximity to schools for drug offenses; and requires an accurate fiscal impact statement prior to any legislation that would establish a new criminal offense or that would amend sentencing provisions of an existing criminal offense.[25]

Between 2009 and 2016, the state’s prison population fell 16 percent, and the share of prison space prioritized for people convicted of violent offenses increased 27 percent, reducing operating costs and averting spending totaling $491 million.[26] Between 2010 and 2015, the state’s crime rate fell 16 percent.[27]

Promote success on supervision and use proportionate responses to respond to violations.