Additionally, a better understanding of changes in prison and supervision population trends can provide insight into associated cost trends. Most often, growing populations lead to growing costs for corrections systems, though this is not always the case.[6] States should carefully review the relationship between changes in population and costs to determine the best opportunities to maximize the use of public safety resources.

All but eight states saw an increase in correctional populations in the last decade. 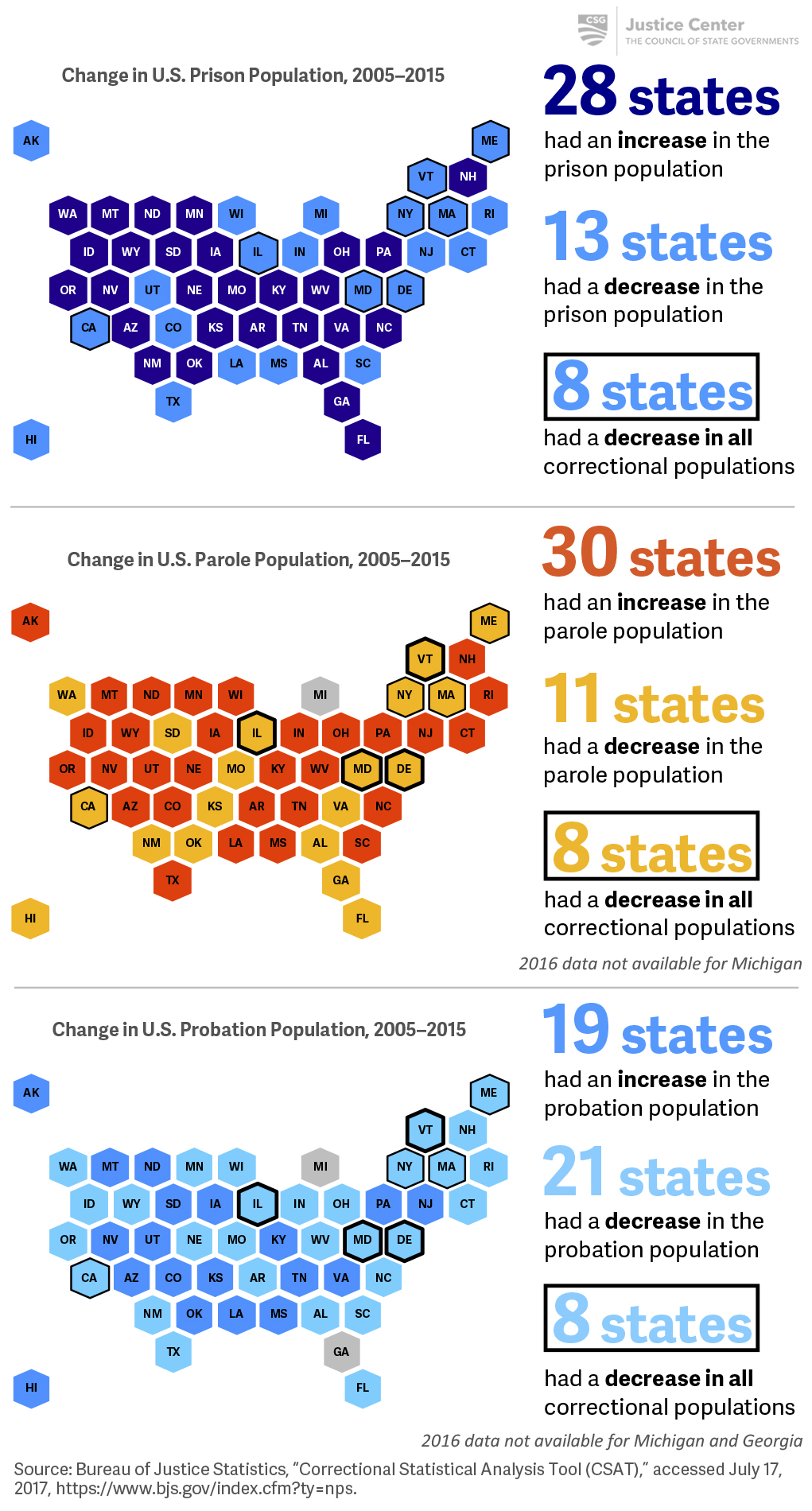 Missouri is confronting a number of troubling trends in its criminal justice system, including a fast-growing female prison population. To address these challenges, Missouri initiated a Justice Reinvestment approach in 2017.

Data analysis during the Justice Reinvestment process revealed divergent trends between women and men in the Missouri criminal justice system:

Breaking down prison and supervision population statistics by gender not only helps policymakers plan for housing women in prison, but also provides valuable insight into how to address women’s needs. Accordingly, Missouri enacted legislation that responds to these trends:

[8] Andy Barbee et al., “Justice Reinvestment in Missouri: Third Presentation to the Missouri State Justice Reinvestment Task Force.” About half of all new admissions to prison were for long-term treatment and were not the result of a new court sentence.

In 2015, the Rhode Island Department of Corrections (RIDOC) projected that after years of steady decline, the state’s incarcerated population would grow 11 percent by FY2025, at an estimated cost to the state of $28 million in additional operating and staffing costs.

JRI analysis revealed that the state’s outdated probation system significantly contributed to the number of people incarcerated. In FY2015, one-fourth of pretrial admissions to the state’s Adult Correctional Institutions were for alleged violations of probation conditions, and an estimated 60 percent of sentenced admissions were for probation violations. Due to the exceptionally large number of people on probation and the lengthy terms they were serving, probation officers were unable to provide meaningful supervision that reduces recidivism and improves public safety.

To modernize sentencing and probation supervision policies, Rhode Island passed and adopted a budget in 2016 that included an upfront investment of $893,000 earmarked for implementation of JRI efforts in the state. This investment allowed RIDOC to: (1) hire and train additional probation officers, (2) develop a three-year strategic plan for improving supervision practices and for sustaining adherence to evidence-based principles, (3) enhance practices for conducting risk assessments, and (4) develop contracts for community-based cognitive behavioral interventions.

The Rhode Island Supreme Court also adopted a series of amendments to the Superior Court Rules of Criminal Procedure and Superior Court Sentencing Benchmarks to address the standard of proof for probation violations, create a mechanism for probation termination, and set a benchmark for sentencing people convicted of nonviolent felony offenses to probation.

In 2017, legislation passed with bipartisan support in both the Senate and the House and was signed by Governor Gina Raimondo on October 5, 2017. The legislation aims to

Identify how much states spend on prisons and supervision.

Assess how state prison and supervision populations are projected to change.