No one measure of recidivism is sufficient to understand criminal activity. Rearrests are perhaps the most comprehensive indicator of a person’s interaction with the criminal justice system, but may suggest there is more criminal activity than there actually is since not all arrests result in convictions. Reconvictions provide clear evidence that people have committed new crimes, but there is a delay in being able to accurately measure reconvictions until the courts conclude adjudication. Reincarceration is the most common measure of recidivism and shows how states are using their costliest criminal justice response to crime, but reincarceration can be the result of both criminal and non-criminal behavior.

All three measures—rearrest, reconviction, and reincarceration—are necessary to have a comprehensive understanding of recidivism trends, yet currently, only nine states—California, Connecticut, Delaware, New Jersey, North Carolina, Oregon, Tennessee, Texas, and Virginia—report on these three measures for people released from prison.[7]

Further, correctional agencies need to analyze these three types of recidivism data in multiple ways to understand what factors are driving trends so they can develop policies and practices to reduce recidivism among people leaving prison. There are numerous ways to conduct these analyses, including

Nearly every state now tracks and publishes at least one measure of recidivism for people exiting prison, but few states track and publish across multiple measures. 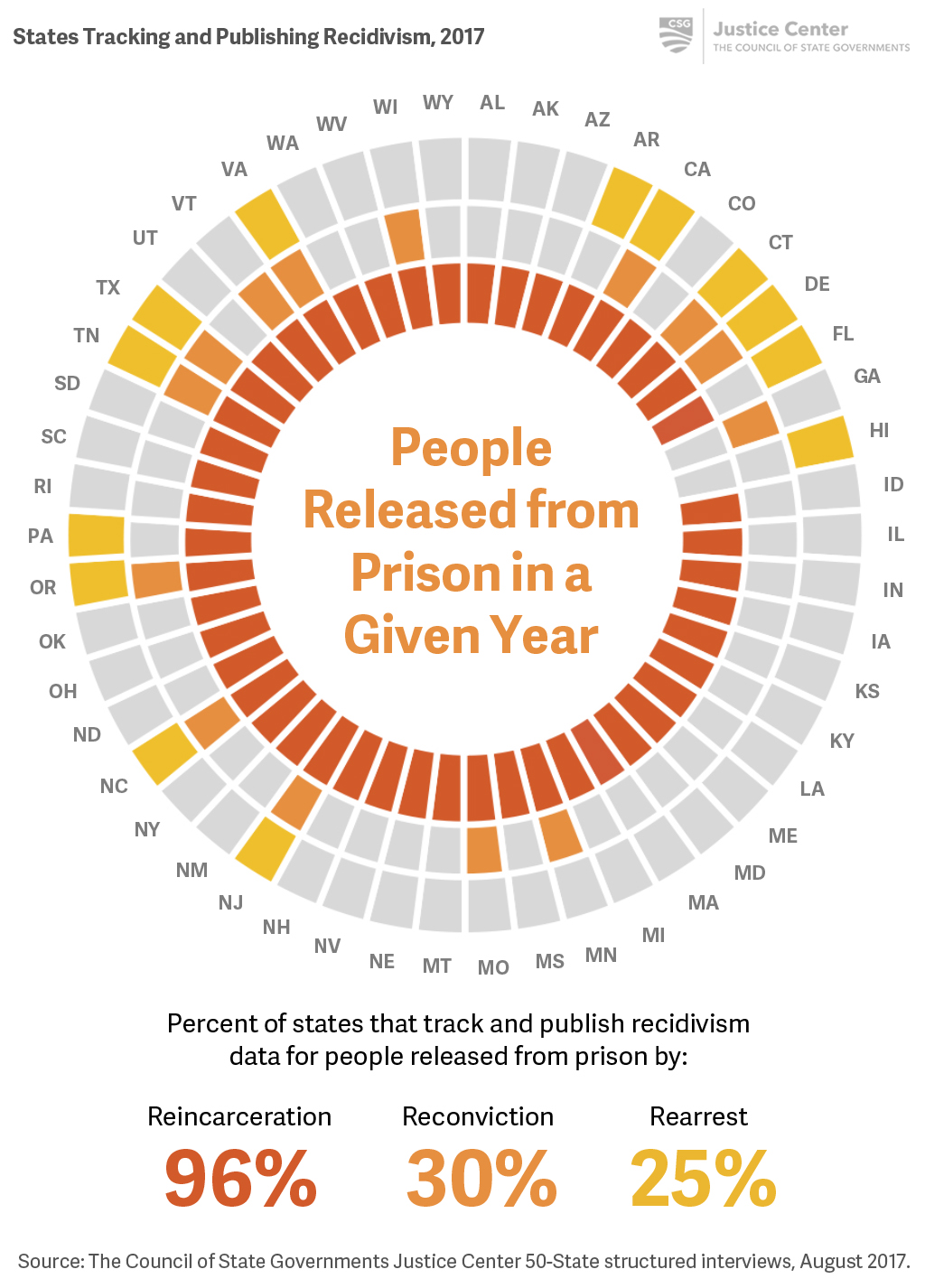 The Second Chance Act (SCA) supports state, local, and tribal governments and nonprofit organizations in their work to reduce recidivism and improve outcomes for people returning to the community from state and federal prisons, local jails, and juvenile facilities. The U.S. Department of Justice’s Office of Justice Programs (OJP) funds and administers Second Chance Act grants. Within OJP, the Bureau of Justice Assistance awards SCA grants serving adults, and the Office of Juvenile Justice and Delinquency Prevention awards grants serving youth. Since 2009, more than 800 awards have been made to grantees across 49 states. For additional information, see the Second Chance Act grant program.

The U.S. Department of Justice’s Bureau of Justice Assistance (BJA), in partnership with The Pew Charitable Trusts, launched the Justice Reinvestment Initiative (JRI) in 2010 to support states using their criminal justice data to design and implement innovative, data-driven, and comprehensive approaches to shift resources toward more cost-effective public safety strategies. Since 2010, more than 30 states have applied a Justice Reinvestment approach. To learn more, see Justice Reinvestment.

The Council of State Governments Justice Center 50-State structured interviews, August 2017. Correctional agencies may track recidivism data without publishing it. The information in this report focuses on published data.

Reincarceration can be the result of both criminal and non-criminal behavior (e.g, incarceration for certain supervision violations), and generally refers to prison incarceration. Incarceration is the costliest criminal justice response available to states, and it also generates a significant financial burden for local jurisdictions, which are often responsible for incarcerating people whose supervision has been revoked.

Rearrest is perhaps the broadest measure of recidivism. Because not all arrests result in a conviction, this metric may suggest there is more recidivism than there actually is. It is still an important measure of the volume of people returning to courts and county jails, however, as well as the most comprehensive indicator of a person’s interaction with the criminal justice system.

Reconviction provides clear evidence that new criminal activity has been committed by someone with prior involvement in the criminal justice system.

Use data to drive recidivism-reduction efforts.

Expand recidivism tracking to include the probation population.